August 1 — New York City firemen and emergency personnel exposed to dust from the collapse of the World Trade Center buildings experienced a decrease in lung function capability equal to 12 years of age-related decline during the year following the 9/11 disaster.

The results of a large-scale study outlining this reduction appear in the August 1 issue of the American Journal of Respiratory and Critical Care Medicine..

Gisela I. Banauch, MD, of the Pulmonary Division at Montefiore Medical Center in New York, and eight associates analyzed the lung function test results of 12,079 New York Fire Department (FDNY) rescue workers, most of whom were at ground zero after the World Trade Center collapse.

Among this group were 83% of those workers eligible for FDNY lung function screening before (starting on January 1, 1997) and after the tragedy. Approximately 11,500 fire personnel and 2,500 emergency medical service workers were at the World Trade Center site within the first week after September 11, 2001.

From the very early stages of the rescue and recovery effort, fire department personnel were exposed to airborne pollutants, including pulverized building materials and combustion products.

"To better define the respiratory consequences of World Trade Center exposure, we have reported an analysis of the longitudinal pulmonary function course from 1997 to 2002 in the entire FDNY screening cohort," said Banauch.

"The percentage of FDNY rescue workers with lung function test measurements below the lower limit of normal increased by at least twofold within each exposure group from before to after 9/11," noted  Banauch.

However, the investigators explained that the rescue workers who had exposure to early- and intermediate-arrival time-based periods had significantly more frequent and more severe respiratory symptoms than did the group that arrived later.

The researchers noted that exposure to pollutants at the World Trade Center have been implicated in problems like "WTC cough" and upper and lower airway inflammation with airway obstruction and bronchial hyperreactivity.

"In contrast to the pronounced influence of arrival time and work assignment on lung function, respiratory protective equipment had no appreciable effect on spirometric reductions after 9/11," said Banauch. "Initial lack of adequate equipment and subsequent compliance problems diminished any protective impact."

In an editorial on the research published in the same issue of the journal, John R. Balmes MD, of the University of California, San Francisco Lung Biology Center, wrote: "While the tragedy of the World Trade Center (WTC) collapse still sears the consciousness of those who value human life, some important lessons in occupational and environmental respiratory disease have been learned as a result of this disaster."

"Perhaps the most striking of these lessons is the value of medical surveillance for workers in jobs with high risk for inhalation exposure to toxicants. Because the New York City Fire Department (NYFD) had pre-exposure pulmonary function test results on virtually all firefighters involved in the emergency response to the attack on the WTC, as well as infrastructure in place to follow them longitudinally, the authors have been able to follow their exposure to WTC dust in a remarkable series of papers."

Balmes concluded that the researchers present strong evidence of a decrease in ventilatory function for exposed workers equal to 12 years of age-related decline.

"The ongoing follow-up of the NYFD cohort thus provided strong evidence for several concepts that previously were more speculative," he continued. "A single, massive exposure to an irritant is not the only route to irritant-induced asthma since multiple, submassive exposures to WTC dust appear to have caused the syndrome in WTC responders. Such exposures now also appear to have caused accelerated decline in lung function, which suggests that this cohort is also at risk of developing chronic obstructive pulmonary disease (COPD). Continued longitudinal followup of the cohort will be necessary to determine whether the early evidence of accelerated decline in FEV1 will lead to COPD since other irritant-exposed cohorts have demonstrative excessive decline in the first post-exposure year with subsequent recovery."

He added that an additional element to the tragedy of September 11 is that this occupational problem could have been prevented "with early and well-trained use of simple respiratory protective equipment." He wrote: "Let us be better prepared for future disasters in many ways, including institution of plans to protect emergency responders from unnecessary occupational exposure to irritant dusts."

New Class of Asthma Medication to Begin the Phase 1 Trial 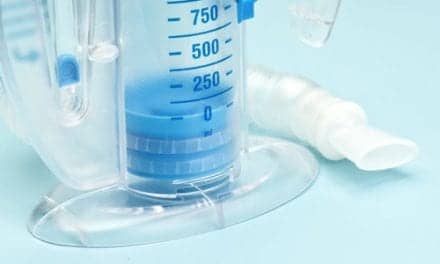 Spirometry Alone May Not Accurately Diagnose COPD in Smokers