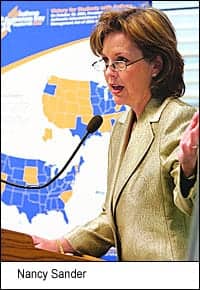 For the first 6 years of her life, Nancy Sander’s daughter struggled with a debilitating illness. Her condition routinely put her in emergency departments and hospitals, preventing her from participating in most of the activities other children her age enjoyed.

“I learned to cope by always being prepared—having gas in the car, carrying emergency numbers—and never leaving her for more than an hour at a time,” Sander recalls. “I spent all of my time trying to accommodate what I thought was her future.”

The illness was severe asthma, and in the early 1980s little was known about proactive methods for preventing outbreaks and improving the lives of its sufferers.

Starting small
Fortunately, Sander’s daughter was selected as a participant in a pharmaceutical clinical trial testing new methods of controlling asthma. As part of the study, Sander and her daughter Brooke were given instructions and the supplies required for participation: a daily symptom diary, a peak flow meter, and medication. They also gave her hope.

“It was the first time anyone ever said that my daughter would be able to ride a bike or play basketball or run with her friends—all of the things little girls do,” says Sander. “My beliefs suddenly changed, because my opportunities for growth and learning suddenly changed.”

The physicians involved with the study taught Sander about actual strategies she could customize to her daughter and her family and then employ to allow them to lead a life not predicated by asthma.

By closely following the regimen—recording symptoms in the diary, taking medications even when Brooke felt fine, using the peak flow meter—Sander began to notice a change in her daughter and in her life.

“After Brooke’s asthma became really well controlled, I realized how regimented my life had been,” Sander says. “Suddenly, we were no longer living from moment to moment, worrying about when the next attack was going to occur. We had scheduled office visits and equipment at home we knew when and how to use.”

Speaking clearly
The proper way to use a peak flow meter was not the only thing the drug study taught Sander. She began to realize that managing asthma was not about blindly following the doctor’s orders but was also about understanding the reasons why the physician was giving a specific piece of advice.

“It’s important for people to learn that they don’t just avoid the allergens because someone told them to. They avoid the allergens because that will help minimize damage to the airway,” she says. “It should make sense to people; if there is a mystery about their asthma, then there’s an opportunity for them to have a better outcome, simply by having that mystery revealed.”

Sander believes making the information accessible is less about “dumbing” down medical jargon and physiological processes and more about simply putting it all into context.

“For example, I didn’t understand the role of allergies and my daughter’s asthma. Then one day the doctor explained to me that Brooke had allergy cells inside her body and every time an allergen came in contact with one of those cells, it ruptured and released toxic chemicals designed to denature and neutralize the invader, that’s their job,” explains Sander, who remembers it as the moment her daughter’s condition actually made sense. “It is not that the information was made simple, it was just made usable, more digestible.”

Her ability to translate the technical aspects of asthma and allergies was soon benefiting friends and neighbors wrestling with similar issues and challenges related to their children’s asthma. Sander quickly realized the information seemed to carry more weight with people when she wrote it down and before long decided to draft a newsletter to help spread the word.

Published in 1985, the first newsletter consisted of a simple message: You are not alone. Among other topics she incorporated details about the use of peak flow meters, along with an article on food allergies.

At the core of that first publication was a philosophy that continues to drive Asthma and Allergy Network Mothers of Asthmatics (AANMA), of which Sander is president and founder: the goal of overcoming, not simply coping with, allergies and asthma.

“If you are caught in a turnstile of symptoms, then you are only able to cope with symptoms; but if you’re overcoming them, you are using strategies to do other things with your life, rather than simply reacting to the illness,” Sander explains.

Copies of the newsletter were put in her physician’s office. Without realizing it, Sander had put a voice to the frustration and anxiety felt by thousands around the country. Shortly after its publication, a reporter contacted her for an interview and the story ran in a local paper on Brooke’s seventh birthday, which is the day Sander’s phone started to ring. And ring and ring.

“People from all over the country were calling me—nurses, elderly people, young parents—and some of them were crying on the phone, they were so desperate,” she says.

Before long, Sander received a call from major media outlets and appeared on both Good Morning America and The Today Show, sharing her story and giving others around the country a resource and a vision for a brighter future.

AANMA grew from that first newsletter into a nationwide organization with more than 70 outreach service coordinator volunteers in more than 20 states.

In addition to several regular newsletters (available with a donation of any dollar amount), the online community, called Breatherville, USA™ (www.breatherville.org), provides instant access to the latest news and information relating to asthma and allergies.

“All of our publications are written toward families, not at them, and the information we provide is very practical and timely, giving people insights into topics they wouldn’t have access to otherwise,” says Sander. Issues generally include how-to articles, some first-person tales, and full-length features addressing a variety of asthma- and allergy-related topics.

The organization hosts an annual Asthma Awareness Day every May in Washington, DC to gain the attention of the nation’s lawmakers and to raise awareness of the issues affecting people with asthma.

A partner in a white coat
Throughout the years, AANMA has forged strong alliances with medical professionals, regularly collaborating with doctors, nurses, respiratory therapists, and pharmacists.

Sander believes patients who are proactive with their health are far more likely to get the care they need—while also helping physicians do their jobs. By educating patients to track their symptoms and know and monitor their medications, Sander is helping physicians provide more appropriate treatments.

“Part of our job is to remind medical professionals that they have to tell us what information they need when we walk into a doctor’s office,” she says. “Vague information doesn’t help, patients need to know the name of their medication, when they last used it, how they last used it—that’s what we are working to teach them.”

Sander also works closely with many respiratory therapists, who are very supportive of AANMA’s efforts.

“They are in the trenches with the families, and they understand how desperate people are to overcome the symptoms and realize that the information we provide is so practical and real,” she says.

Often sitting on the same committees and working toward a common goal, Sander says her RT contacts know they can count on her when they come up against issues that concern them, and they often return the favor.

Crossing the CHASM
One subject Sander is reaching out to RTs about is AANMA’s effort to provide patients who have respiratory conditions with access to safe and effective medications.

According to Sander, with increasing frequency patients are being exposed to health risks associated with unapproved and often illegal nebulizer medications that are being substituted in place of the prescribed medications that have been approved by the US Food and Drug Administration (FDA).

AANMA convened the Consumer Health Alliance for Safe Medication (CHASM), which is a coalition of patients and medical professionals committed to educating patients about this practice, as well as bringing about regulations to prevent its occurrence.

“Without their knowledge, patients with asthma, emphysema, and other respiratory conditions are increasingly exposed to unnecessary health risks associated with these medications,” she says, noting the majority of these cases occur when the nonapproved drugs are distributed through mail-order services or durable medical equipment companies.

Inadequate medication can have a significant impact on the lives of those attempting to treat their condition.

“One case involved a 5-year-old boy whose medication was being diluted by at least 70%, during which time he was so sick he’d been tested for cystic fibrosis and sinus disease,” Sander explains. The child’s mother contacted AANMA for information about food allergies, and the staff member figured out the likely cause of his unresponsiveness to medications. “As soon as her son got on the real medication, he got well.”

About a year ago, AANMA/CHASM submitted a citizen petition to the FDA urging the agency to enforce public safeguards relating to manufacturing, promotion, and dispensing of unapproved respiratory medications.

Sander also hopes that more RTs will come forward to expose companies taking part in this practice and that they will act as the organization’s eyes and ears in the community, helping put a stop to people who are acting unlawfully.

Past success
Such activism and interaction with the government are nothing new for Sander. In recent years, AANMA has taken on the cause of metered dose inhalers (MDIs), which are the only medications used by asthma sufferers that do not include any way of measuring the amount of medication remaining in the inhaler. To complicate matters, the efficacy of the medication provided from the inhaler wanes as doses are administered.

The organization worked to make the case to the FDA, which issued a jurisdictional update last September, in part stating the need for MDI manufacturers to include some sort of device on the product to indicate the remaining number of full doses. Inhalers with an integrated dose counter will begin appearing on the market in late 2006 or early 2007.

Future goals
Twenty years later, Sander still believes in the fundamentals she picked up in the clinical trial that changed her life.

“Everything AANMA is doing is based on beliefs, behaviors, and outcomes,” she says. “Whatever patients and their parents believe about asthma, their behaviors and outcomes will follow.”

To that end, AANMA will continue to be a force for patient education and advocacy. Sander is also turning her focus on decreasing the amount of red tape she believes increases the distance between patients and care providers.

“Our advocacy is going to take a stronger role; we have to look at who’s in charge of our next breath,” says Sander. “Before we even show up in the doctor’s office, there are people who have made decisions about what medications we will be able to use or how many times we can get a bronchodilator. For the rest of my days in doing this, I’m going to ensure there’s a strong foundation so that people with asthma will not be the ones that get walked on, they just won’t be.”

Dana Hinesly is a contributing writer for RT. 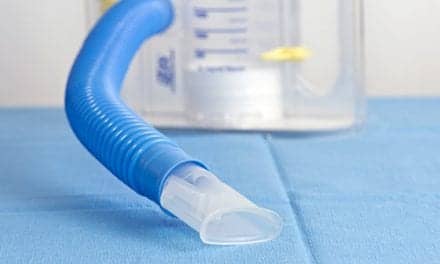