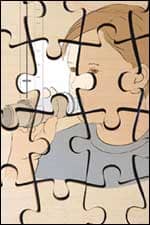 Therapy for pediatric asthma has improved dramatically in the United States over the past decade. Newer agents, such as nebulized corticosteroids and leukotriene-receptor antagonists, have allowed pediatricians to give better care to children with asthma. As a result, subspecialists seeing children whose asthma cannot be controlled (with what is usually very effective antiasthma therapy) must consider other, complicating diagnoses. The differential diagnosis of poorly controlled asthma in younger children (especially those under 3 years old) includes congenital airway disorders like tracheomalacia and bronchomalacia (which can lead to persistent wheezing) and silent gastroesophageal reflux disease (GERD). When a child vomits regularly, GERD is recognized and treated. Those patients whose GERD is more subtle (for example, whose GERD does not result in vomiting) are often missed. The diagnosis of GERD often proves to be the missing piece of the diagnostic puzzle in poorly controlled asthma in pediatric patients.

Part of the difficulty of establishing a cause-and-effect relationship between GERD and bronchospasm in children is that both entities are quite common. Asthma has high prevalence, but most asthma patients do not have GERD. Conversely, most patients with GERD do not have asthma. Treating GERD in every asthma patient will not necessarily improve asthma control. How does one select patients who will benefit from antireflux therapy? Age is the most important consideration, since GERD is quite common in infants and becomes less so with increasing age. In a study1 of infants (mean age: 7 months) with persistent wheezing, 84 infants underwent 24-hour pH-probe studies. The investigators found that 65% of those infants identified as having GERD were able to discontinue all daily asthma medications.

Subsequent studies have not shown a compelling relationship between GERD and asthma. This probably demonstrates that an inherent susceptibility to GERD-induced bronchospasm is not universal. In adults, a simple test can determine whether one is susceptible. This is called the Bernstein test, and involves infusing a dilute hydrochloride solution into the esophagus using a nasoesophageal catheter. Pulmonary-function tests performed after the infusion can demonstrate a decrease in pulmonary function in susceptible patients. In one study2 of adults, four of 15 subjects with asthma had a 20% improvement in a forced expiratory volume in 1 second after 6 weeks of acid suppression.

One of the challenges in diagnosing GERD is that the patient does not have to vomit in order to have GERD. Most patients that I have diagnosed with GERD have had silent GERD that is subtle and subclinical. Other presentations of silent GERD include recurrent croup. Often the only sign of GERD in children is very frequent croup of the spasmodic variety. These children awaken with a barking cough in the middle of the night, without antecedent respiratory viral symptoms. I have long been taught (and now teach) that recurrent croup is GERD until proven otherwise. Other symptoms of GERD include hoarseness, laryngomalacia, pain behaviors, back arching, and cough. Since reflux is worse when the patient is horizontal, symptoms are generally worse at night.

Working Up GERD
Chronic lung disease is strongly associated with GERD. In cystic fibrosis, for example, GERD is believed to be related to increased abdominal pressure from chronic cough. Bronchopulmonary dysplasia has a strong association with GERD. In both of these diseases, it is routine to add antireflux therapy when respiratory symptoms are poorly controlled. A favorable response to acid suppression is sufficient evidence of GERD to continue therapy beyond a trial period. In my practice, response to therapy is the most common way I diagnose GERD in children. If the child gets better and becomes asymptomatic, I am not inclined to perform invasive testing to establish this diagnosis further.

In patients in whom the role of GERD remains unclear, further testing is required. Milk scanning (nuclear medicine gastroesophageal scintigraphy) is a useful and noninvasive means of establishing the presence of GERD. This test is often the first test I order because it has a low radiation exposure (roughly equivalent to that of two-view chest radiography) and a high sensitivity, since the test takes place over an hour. It does not require the child to be in a specific position, other than lying on a table under a gamma camera. Another major advantage of scintigraphy is that it allows one to quantify gastric emptying. Delayed gastric emptying can act as a multiplier for GERD, and can be treated with low-dose erythromycin.

It is the exception, rather than the rule, for my patients to undergo invasive testing for GERD (such as 24-hour esophageal-pH measurement or endoscopy of the gastrointestinal tract). Just the same, the closest we have to a gold standard for diagnosis of GERD is the pH probe. The test requires placement of a pH probe in the patient’s esophagus through the nasal route. The standard test is 24 hours in length; it requires an overnight stay in the hospital. It is accepted as the standard diagnostic test in GERD, but can be falsely negative in patients using acid suppression.

Esophagogastroduodenoscopy (EGD) with biopsies of lower esophagus, stomach, and duodenum is helpful in ruling out eosinophilic gastroenteritis or eosinophilic esophagitis. This entity is associated with both GERD and asthma.4

I have tried to minimize invasive procedures in my own practice, but if a patient is symptomatic enough to warrant EGD, I will usually perform bronchoscopy with BAL under the same anesthesia. In addition to the usual tests run on the BAL fluid, I request a fat stain (oil red O). Since the macrophage takes up foreign materials in the alveolar space, fat can be detected within the cytoplasm of the macrophage. The presence of lipid within macrophages is evidence of aspiration.5 One cannot tell, however, if the aspirated food is the result of anterograde or retrograde aspiration. Children with profound neurological disease (such as cerebral palsy) are at high risk for both swallowing dysfunction and GERD. Additional testing for swallowing disorders (modified barium swallow or salivagram) can demonstrate aspiration.

In intellectually normal children with poorly controlled respiratory disease, the finding of lipid-laden macrophages in the alveolar space through BAL is presumptive evidence of GERD to the level of the larynx. A large number of lipid-laden macrophages in BAL fluid is evidence of aspiration, and is an alarming finding that often leads to a consultation with our pediatric surgeons for consideration of fundoplication.

Conclusion
In infants with poorly controlled asthma, GERD should be a differential diagnosis. GERD should be considered in older children, as well. A number of diagnostic studies are available to the clinician, starting with response to therapy. The clinical situation will dictate how aggressively one should look for GERD as an explanation for poorly controlled asthma or other respiratory disease.