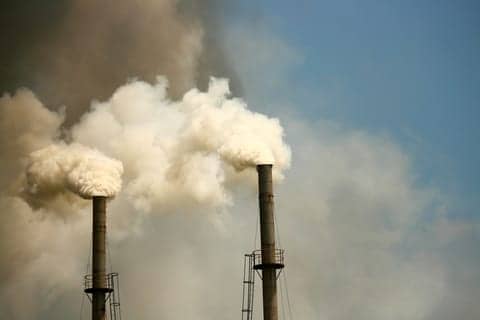 A long-term study of the health of Canadian children has found that exposure to ozone (O3), a common air pollutant, at birth was associated with an 82% increased risk of developing asthma by age three. The study, which was a 10-year follow-up to the 2006 Toronto Child Health Evaluation Questionnaire (T-CHEQ), was presented at ATS 2018.

“Our findings show that the hazard ratios for ozone measured at birth as a single pollutant showed statistically significant higher risks for development of asthma, allergic rhinitis and eczema,” said lead author Teresa To, PhD, senior scientist, Child Health Evaluative Services at The Hospital for Sick Children (SickKids), Toronto, Ontario, Canada. “The results of our study are important because the study examines the effect of pollution on health outcomes in early childhood, and has the longest longitudinal follow-up of a cohort of school-aged children in Canada.”

A hazard ratio is a statistical formula used to determine risk. For this part of the T-CHEQ study, 1,881 children were followed from birth to 17 years of age, on average. Amongst these children, 31% developed asthma, 42% had allergic rhinitis and 76% had eczema. An 82% higher risk of developing asthma was associated with each 10 parts per billion, or ppb increase in exposure to ozone at birth. A similar risk was not observed in association with exposure to nitrogen dioxide or PM2.5, a type of pollutant.

The researcher team took annual average concentrations of pollutants from fixed monitoring stations across Ontario. They assigned these measurements based on study participants’ postal codes at birth.

Development of asthma, allergic rhinitis and eczema were determined based on any records of health services used for these conditions. The researchers adjusted for variables such as parental history of asthma and early home exposure to pollutants.
Some studies have shown that ozone depletes antioxidant activity and increases indications of inflammation in the respiratory tract fluid lining and affects lung growth.

“We examined O3 and NO2, as well as particulate matter PM2.5 and ultra-fine particulates (UFP – not discussed in this abstract), because these are the key pollutants that have been suggested in the literature to exacerbate asthma, diabetes, hypertension and COPD,” said Dr. To, who is also a professor in the Graduate School of Public Health at the University of Toronto. “It is well supported by research findings that short-term and long-term exposure to NO2 and particulate matter can increase asthma exacerbations, respiratory symptoms, hospitalizations and even mortality. Similarly, short-term exposure to O3 can decrease lung function and increase the risk of respiratory infections in children.”

Children are at a higher risk because their lungs and other respiratory organs are smaller, and they spend more time in outdoor physical activities that make them breathe faster and more deeply. Poor air quality may have a larger impact on them.

“The quality of air in Ontario, Canada is relatively good on most days of the year, yet we observed an adverse effect on health outcomes in children who were exposed to air pollution at birth and in early life,” said Dr. To. “This has significant implications for other countries that have higher levels of pollution. It is well established that short-term exposure to pollutants such as ozone can decrease lung function, exacerbate asthma and increase the risk of respiratory infections. There is now mounting evidence that long-term exposure can lead to disease progression, such as from asthma to COPD and could increase the risk of death.”

The World Health Organization (WHO) 2016 report on air pollution and health indicated that 92 percent of the world’s population lives in places where air quality levels exceeded WHO limits. According to WHO, one in eight deaths in the world is a result of air pollution exposure, making air pollution the single largest global environmental health risk.

“Air pollution isn’t only one or a few countries’ problems, but rather a global public health concern,” Dr To said. “While there are individual actions one can consider to reduce exposure to air pollutants, it also requires action by public authorities at the national, regional and international levels. Reducing air pollution could save millions of lives.”