For patients with persistent asthma, there are a number of treatment options. From inhaled corticosteroids (ICS) and short- and long-acting inhaled ?2-agonists to leukotriene agonists, patients can usually find relief from their symptoms and go about their lives. But for those asthma patients who remain symptomatic or experience exacerbations despite the current treatment options, missed school or work and hospitalizations can make daily life problematic.

Currently, an estimated 300 million people worldwide suffer from asthma. By 2025, that number is expected to grow by more than 100 million. Given the growing prevalence of the disease, the search is on for treatment options that can fill the gap when current options, even at higher doses, fall short.

One option currently under investigation by Ridgefield, Conn-based Boehringer Ingelheim Pharmaceuticals Inc is the use of tiotropium—a drug that has been approved for and is currently used to treat chronic obstructive pulmonary disease (COPD) under the brand name Spiriva in more than 100 countries, including the United States. 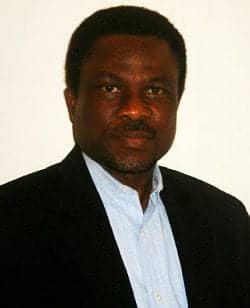 According to Tunde Otulana, MD, Vice President, Clinical Development and Medical Affairs for Respiratory at Boehringer Ingelheim Pharmaceuticals, tiotropium has provided significant relief for patients with COPD. “It’s been the number one COPD drug used as a bronchodilator,” he notes, adding that it has been used for both a long time and very widely. With that success, the company started looking at the possibility of using it for asthma treatment. “It makes sense,” says Otulana, who previously served as medical officer and clinical team leader in the division of pulmonary and allergy drug products at the US Food and Drug Administration. “Asthma is a disease that requires bronchodilators and tiotropium is a bronchodilator.”

In September, the company released the first data from its phase 3 UniTinA-asthma program. The program includes a number of clinical trials looking at the use of tiotropium in adults, adolescents, and pediatric patients with different asthma severities and whose asthma remains symptomatic or uncontrolled on current treatment with ICS. With more than 150 sites globally, the UniTinA-asthma program includes more than 4,000 patients.

The data from the two PrimoTinA-asthma studies found that tiotropium delivered once daily via the Respimat Soft Mist inhaler offered significant relief to adult patients who had remained symptomatic on high dose ICS and long-acting beta agonists (LABA). The findings, which were published in the New England Journal of Medicine this past fall, showed significantly improved lung function and reduced asthma exacerbations in those patients. The PrimoTinA-asthma studies, funded by Boehringer Ingelheim and Pfizer, were replicate double-blind parallel-group trials, enrolling 912 adult patients, with a mean age of 53 years. They included asthma patients with postbronchodilator forced expiratory volume in 1 second (FEV1) <80% predicted and an asthma control questionnaire (ACQ) score ?1.5 while on at least high dose ICS or LABA. Participants were randomized to receive tiotropium 5 µg or placebo in addition to their usual care for 48 weeks.

Using prespecified co-primary lung function endpoints, including peak and trough FEV1 at 24 weeks, the findings showed that adding tiotropium resulted in significant lung function improvements at 24 weeks (mean change from baseline tiotropium versus placebo [± standard error]): peak FEV1 trial 1: 86 (±34) mL (P=0.01), trial 2: 154 (±32) mL greater (P=0.001); trough FEV1 trial 1: 88 (±34) mL (P=0.01), trial 2: 111 (±30) mL greater (P=0.001), which were sustained over 48 weeks. For the third co-primary endpoint, in the prespecified combined analysis of the two trials, the addition of tiotropium was associated with a 21% risk reduction (HR 0.79, P=0.03) in time to first severe exacerbation at 48 weeks. (The studies defined severe exacerbations as requiring corticosteroids for at least 3 days and a decrease in lung function.) Moreover, the addition of tiotropium was found to reduce the risk of any asthma exacerbation by 31% (P=0.0001), defined by a significant increase in symptoms or peak expiratory flow (PEF) drop ?30% over ?2 days. With regard to the asthma control questionnaire and the asthma quality of life questionnaire, improved scores were noted in one trial, and a trend toward improvement was noted in the ACQ in the other study.

As far as adverse events, the data collected for the two studies showed that the rate of adverse events reported in the tiotropium add-on and placebo add-on groups was similar, with nasopharyngitis and headache reported as the most common adverse event.
Overall, Otulana calls the results of these first phase 3 studies encouraging. “We demonstrated improvement on both primary endpoints at 6 months; and we showed that over the 48-week period, we delayed the time to exacerbation when we combined both studies. So very good data, very supportive of moving the program forward.”

While the current data relate to adult asthma patients, there are a number of ongoing phase 3 studies within the UniTinA-asthma program that look specifically at the use of tiotropium delivered via the Respimat inhaler in children from age 1 and up, as well as other age groups, and various levels of disease severity. In the end, Otulana says there will be a broad range of data on the use of tiotropium for asthma.

If tiotropium is eventually approved as an asthma treatment, it will be the first anticholinergic drug for asthma. “What is unique about that is that [it targets] a different type of receptor compared to [current] bronchodilators,” says Otulana. While bronchodilators like albuterol and salmeterol target the beta antigenic receptors, tiotropium works through the anticholinergic receptors in the airway, adding a different spectrum of bronchodilator to asthma treatment.

The development of the Respimat inhaler marks the first new class, or generation, of inhaler in decades. Propellant-free, Respimat delivers a metered dose of medication as a fine mist via its uniblock nozzle system. According to Otulana, who is a current member of the United Nations Environment Programme Aerosol Technical Operations Committee, which is charged with overseeing the phaseout of chlorofluorocarbons (CFCs) under the Montreal Protocol, the Respimat inhaler is the “preferred delivery system for asthma because it’s a multidose device.” In addition, it is ideal for use by adolescent asthma patients because it does not require the amount of air force needed to use, for instance, dry powder inhalers. As a result, the Respimat inhaler lends itself to a broad spectrum of asthma patients, says Otulana.

In the end, tiotropium delivered via the Respimat inhaler would offer asthma patients who remain symptomatic on LABA and/or ICS an additional therapy option that could go a long way to improving their quality of life.

Alison Werner can be contacted at [email protected]