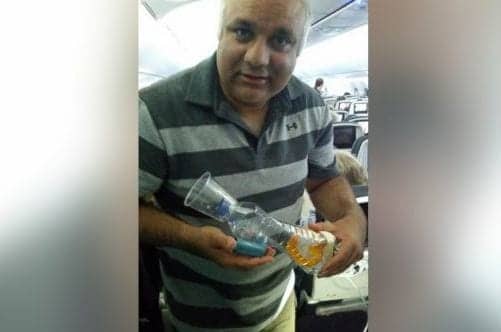 When an asthmatic toddler without his medication began to have breathing difficulties on a Transatlantic flight from Spain to the US, a New York doctor sprang into action and created a make-shift nebulizer to deliver oxygen and asthma medication to the child, according to an ABC News report.

Dr Khurshid Guru, director of Robotic Surgery at the Roswell Park Cancer Institute, told ABC News he was aboard a transatlantic Air Canada flight on Sept 18 when he was notified of a toddler in trouble. The two-year old’s parents said they accidentally packed his asthma medication in their checked luggage.

When Guru discovered the child’s oxygen levels at 87-88%, decided he needed to fashion a nebulizer-like device to deliver supplemental oxygen, as well as deliver medication from an adult inhaler on board, ABC News reported.

Guru cut up a water bottle and added oxygen to one end and the adult inhaler through a small hole in the bottle, which served as a holding chamber. Guru also fixed a water cup to the bottle opening, which he instructed the parents to hold it to the child’s face.

“Within about half an hour and two treatments he was sounding much better,” Guru told ABC News, noting the child’s oxygen levels rose to 94-95%.

Guru later tweeted photos of the device and told ABC News he wanted to share the story as a reminder to parents of asthmatic children to always keep their vital medication nearby.

Flying back from ERUS15 had to design a nebuliser for a 2 yr old asthmatic over the atlantic. Thank God kid did well! pic.twitter.com/fQOJ2Ac0EA — Khurshid A. Guru (@KhurshidGuru) September 18, 2015