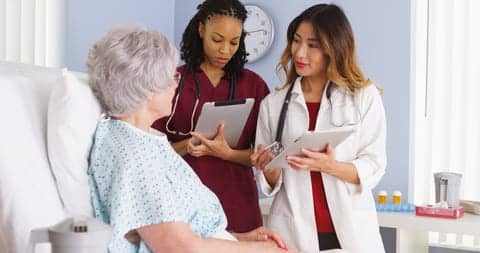 According to Medwire News, researchers say that using the lower limit of normal of the forced expiration volume in 1 second/forced vital capacity ratio improves risk stratification in patients with COPD undergoing thoracic surgery.

Using this classification the team identified an “in-between” group of patients with obstructive impairment whose FEV1/FVC ratio was below the 0.70 fixed ratio, in accordance with The Global Initiative for Chronic Obstructive Lung Disease (GOLD) definition of COPD, but above the lower fifth percentile of an age-matched healthy reference group, thereby failing to meet the American Thoracic Society (ATS)/European Respiratory Society (ERS) criteria for COPD diagnosis.

This in-between group of 124 patients had better postoperative outcomes than a group of 178 COPD patients whose FEV1/FVC ratio was both below 0.7 and the LLN.

“This classification provides us with a measure of confidence, for example, in proposing thoracic surgery for the in-between group of patients as opposed to those in the COPD group”, say researcher Naozumi Hashimoto (Nagoya University Graduate School of Medicine, Japan) and colleagues.

Get the full story at www.medwirenews.com