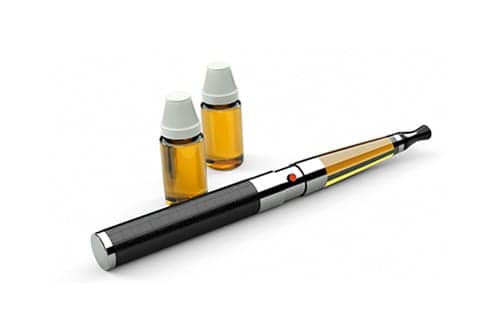 E-cigarette vaping with nicotine appears to hamper mucus clearance from the airways, according to new research published online in the American Journal of Respiratory and Critical Care Medicine.

In “Electronic Cigarette Vapor with Nicotine Causes Airway Mucociliary Dysfunction Preferentially via TRPA1 Receptors,“ a team of researchers from the University of Kansas, University of Miami and Mt. Sinai Medical Center in Miami Beach reports that exposing human airway cells to e-cigarette vapor containing nicotine in culture resulted in a decreased ability to move mucus or phlegm across the surface. This phenomenon is called “mucociliary dysfunction.” The researchers report the same finding in vivo in sheep, whose airways mimic those of humans when exposed to e-cigarette vapor.

“This study grew out of our team’s research on the influence of tobacco smoke on mucus clearance from the airways,” said senior author Matthias Salathe, MD, chair of internal medicine and a professor of pulmonary and critical care medicine at the University of Kansas Medical Center.  “The question was whether vape containing nicotine had negative effects on the ability to clear secretions from the airways similar to tobacco smoke. “

Mucociliary dysfunction is a feature of many lung diseases, including asthma, COPD,  and cystic fibrosis. Specifically, the study found that vaping with nicotine impairs ciliary beat frequency, dehydrates airway fluid and makes mucus more viscous or sticky. These changes make it more difficult for the bronchi, the main passageways to the lung, to defend themselves from infection and injury.

The researchers note that a recent report found that young e-cigarette users who never smoked were at increased risk to develop chronic bronchitis, a condition characterized by chronic production of phlegm that is also seen in tobacco smokers.

Dr. Salathe said the newly published data not only support the earlier clinical report, but help explain it. A single session of vaping can deliver more nicotine to the airways than smoking one cigarette. Moreover, according to Dr. Salathe, absorption into the bloodstream is lower, possibly exposing the airways to high nicotine concentrations for prolonged periods of time.

The study also found that nicotine produced these negative effects by stimulating the ion channel transient receptor potential ankyrin 1 (TRPA1). Blocking TRPA1 reduced the effects of nicotine on clearance in both the human cells in culture and in the sheep.

“Vaping with nicotine is not harmless as commonly assumed by those who start vaping, At the very least, it increases the risk of chronic bronchitis.” Dr. Salathe said. “Our study, along with others, might even question e-cigarettes as a harm reduction approach for current smokers with respect to chronic bronchitis/COPD.”