Asthma is a widespread disease that crosses all boundaries. At times, it is difficult to establish a clear diagnosis of asthma, which is evaluated by pulmonary function testing (PFT), including spirometry, pre-post bronchodilator tests, and bronchial challenge tests. Vocal cord dysfunction (VCD) is much less common than asthma, and has often been misdiagnosed as asthma. This article will explore these two diseases, discuss the confusion related to making a proper diagnosis, and explore the treatment options for both, with a focus on VCD.

Asthma is defined by the National Asthma Education and Prevention Program’s Expert Panel Report 3 (EPR-3) as a chronic disease of the airways and is characterized by “variable and recurring symptoms, airflow obstruction, bronchial hyperresponsiveness, and an underlying inflammation.”1 The symptoms for an asthma attack often include cough, shortness of breath, chest tightness, and wheezing. An asthma attack occurs when the bronchial smooth muscles suddenly constrict and decrease the lumen of the airway. This sudden decrease causes increased resistance to airflow during expiration, increased work of breathing, and prolonged expiratory time. In cases of severe or unresponsive attacks, hospitalization is required. In rare cases, death ensues.

Another feature of the disease is the involvement of inflammatory cells, including mast cells, eosinophils, T lymphocytes, macrophages, and neutrophils. Most people with asthma have an allergic response to an allergen or irritant that manifests in the symptoms listed above. This allergic response is called atopy, and is mediated by immunoglobulin E. About 70% of those with asthma also have allergies.2

The EPR-3 guidelines recommend that the diagnosis of asthma rely on several points:

Spirometry is recommended to document the reversibility of the obstruction when a short-acting bronchodilator is administered.

According to the Centers for Disease Control and Prevention figures published in 2010, 18.7 million adults and 7.1 million children have asthma in the United States.3 Management of asthma includes avoidance of irritants and allergens, medications (bronchodilators, corticosteroids, leukotriene modifiers, and IgE blockers among others), and immunotherapy.

This paradoxical movement causes symptoms that include stridor, wheezing (more prevalent over the neck and upper thorax), cough, dyspnea, and chest pain. The patient may sometimes appear to be in severe distress, but the occurrence is not life-threatening and is usually self-limiting.

Based on a review of the current medical literature published in 2006, more than 1,100 patients have been reported to have VCD.5 Since VCD has many of the same symptoms as asthma and asthma is much more prevalent, patients with VCD often are misdiagnosed with asthma. According to the review article published in Clinical Pulmonary Medicine, about one-third of the patients (or 380) were originally diagnosed with asthma but later found to have VCD.5

The syndrome has been given many names including pseudoasthma, emotional laryngeal wheezing, psychogenic stridor, and episodic paroxysmal laryngospasm. The term paradoxical vocal fold motion (PVFM) has more commonly been used by otolaryngologists, speech pathologists, and speech therapists in describing the syndrome.6 The incidence of VCD in the general population has not been reported, but it appears to be uncommon. In a study published in 1997 that looked at 1,025 patients with dyspnea, 2.8% were found to have VCD.5 Another study (also published in 1997) examined 236 patients who were admitted to an inner city hospital for exacerbation of asthma and found about 2% had VCD.5 A third study (published in 1999) of 120 active duty military patients with dyspnea on exertion found that some 12% had VCD.5 In the review of VCD in medical literature, females have VCD at the rate of 2:1 compared to males and about 70% of the patients are adults.5 Diagnosis of VCD also is complicated by the fact that a considerable number of patients with asthma also have VCD. Differential diagnoses of VCD include anaphylaxis, angioedema, epiglottitis, laryngomalacia, croup, vocal cord paralysis, and foreign body aspiration.4,6 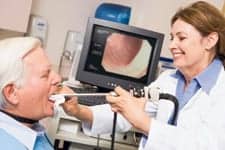 Diagnosis of VCD involves three main criteria: clinical symptoms, laryngoscopy, and PFT.6 Clinical symptoms occur intermittently and most commonly include dyspnea, stridor, and wheezing. It is important to distinguish wheezing in the neck and upper airways as opposed to wheezes in the lower airways. Stridor occurs during inspiration and may be mistakenly described as wheezing. Patients will often be asymptomatic and have a normal exam when VCD is not occurring. Like asthma, there are no radiologic or laboratory findings that can confirm or rule out the diagnosis of VCD.

Laryngoscopy is considered to be the gold standard for proving the presence of VCD.5 The exam involves visualizing the vocal cords while the patient is performing a variety of maneuvers such as speaking, panting, breathing normally, and taking repeated deep breaths. Adduction of the vocal cords occurs on inspiration and the formation of what is described as a “posterior diamond-shaped chink” is the classic laryngoscopic finding. However, adduction also may occur during both inspiration and expiration. Inspiratory adduction of greater than 50% is a clear sign of VCD. The upper airway may need to be provoked by exercise to have the VCD manifest and the laryngoscopic findings appear.

Significant PFT findings for VCD are limited to the inspiratory portion of the flow-volume (F/V) loop. When VCD is occurring, the F/V loop will be truncated or flattened. This is described as a variable extrathoracic obstruction (see Figure 1). However, during times that VCD is not present, spirometry will appear normal. The response to bronchoprovocation testing using methacholine has mixed results.5,6 A normal PFT with a normal FEV1/FVC ratio in a patient who has asthma-like symptoms (dyspnea, cough, wheeze, and a sudden onset) should be considered for possible VCD.6 Often these patients will have been treated with several asthma medications with little to no response.5

VCD is linked to a variety of factors, but there has not been a clear pattern or single test or finding that establishes the diagnosis. Asthma and exercise have already been mentioned as possible precipitating factors. Psychological issues such as post-traumatic stress disorder, anxiety, depression, panic attacks, and sexual abuse have been linked to VCD.4,5

Environmental and occupational irritants have been established as precipitating factors. These include dust, smoke, cleaning products, ammonia, and ceiling tile dust.4,5 The rescue and recovery workers from the 2001 terrorist attack on the World Trade Center were exposed to significant amounts of dust from pulverized cement. In a study of 172 workers, 32 (or 18.6%) showed the truncated inspiratory F/V loop associated with variable extrathoracic airflow obstruction. Ten workers were diagnosed with VCD based on laryngoscopic findings.7

Other occupations such as professional sports and the military seem to carry a greater incidence for VCD. With athletes, outdoor exercise was linked to higher incidence of inspiratory stridor compared to indoor exercise and is thought to be associated with the colder, drier ambient air. In cases involving military personnel, the stress of training and wartime may be causes for VCD.7

Gastroesophageal reflux disease (GERD) has been linked to VCD, but successful treatment of GERD did not relieve the VCD in all patients. Infants with GERD seem to have the closest association with VCD, and they frequently respond well to relief of the GERD.5,6 Note that many of the issues linked to VCD are common to asthma (exercise, stress, environmental and occupational irritants, and GERD). These common precipitating factors between the two diseases contribute to the confusion and may lead to mistaken diagnosis.

Management of VCD must begin with establishing the proper diagnosis. In some studies, more than half of the patients who ended up being diagnosed with VCD had previously been mistakenly diagnosed with asthma and carried this misdiagnosis for an average of 4 to 15 years.8 Treatment with asthma medications for those with VCD alone has little to no effect. However, in those who have both diagnoses (VCD and asthma), these medications should be used in accordance with the evidence-based guidelines.

One of the first steps in managing VCD is to reassure the patient and to relieve their fears. In the acute setting, instruction on different breathing techniques such as pursed-lip breathing and diaphragmatic breathing, and light sedation, have been effective in resolving the breathing problems. A heliox mixture may be used to reduce the air density and ease the work of breathing.4,5 Long-term management calls for speech therapy as the primary approach to train the patient to focus on the expiratory phase of breathing and using diaphragmatic breathing and relaxed-throat breathing techniques. Psychotherapy and counseling is the next approach that has been used in treatment, but there is a lack of prospective research to provide evidence for the effectiveness of this therapy. Other modalities for managing VCD include biofeedback, hypnosis, injection of botulinum toxin, and the use of adjustable inspiratory valves to provide resistance to inspiratory flow and reduce stridor.4,5,9

Vocal cord dysfunction can masquerade as asthma and is often mistakenly diagnosed as such. The problem of misdiagnosis has many causes, among them, the following:

Although VCD is a rare occurrence, if it is misdiagnosed, the patient will suffer financially, psychologically, and in quality of life; the health care system also will be tied up in providing the wrong therapy. Respiratory professionals should be aware of this condition and should suspect VCD as a possibility in those patients who are being treated for asthma but show no improvement. Clear understanding of the EPR-3 guidelines on asthma provides a solid foundation to be able to differentiate between VCD and asthma. Proper treatment of VCD begins with an accurate diagnosis. Gathering the right professionals in the team (including the physician, respiratory therapist, nurse, speech pathologist, psychologist, and others) will ensure successful treatment of the patient.

Bill Pruitt, MBA, RRT, CPFT, AE-C, FAARC, is a senior instructor and the director of clinical education in the department of cardiorespiratory sciences, College of Allied Health Sciences, at the University of South Alabama in Mobile. He is also a PRN therapist at Springhill Medical Center and volunteers in the Pulmonary Clinic at Victory Health Partners in Mobile. For further information, contact
[email protected].

Consuming the Right Fats During Pregnancy Could Reduce Infant Wheeze