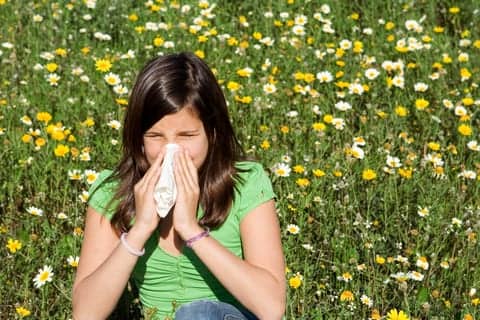 A pair of air pollutants linked to climate change may also be a significant contributor to the rise in individuals sniffling, sneezing, and wheezing during allergy season, according to recent research. Nitrogen dioxide and ground-level ozone seem to provoke chemical changes in certain airborne allergens that could increase their potency, which, in combination with changes in global climate, may help explain why airborne allergies are becoming more common, according to Science Daily. Presently, data from the American College of Allergy, Asthma and Immunology indicates that about 50 million people in the United States suffer from nasal allergies, with the numbers on the rise.

Researcher Ulrich Pöschl, PhD, says, “Scientists have long suspected that air pollution and climate change are involved in the increasing prevalence of allergies worldwide. But understanding the underlying chemical processes behind this phenomenon has proven elusive.” Pöschl adds, “Our research is just a starting point, but it does begin to suggest how chemical modifications in allergenic proteins occur and how they may affect allergenicity.”

The researchers studied the effects of varying levels of nitrogen dioxide and ozone on the birch pollen allergen Bet v 1. The research team determined that ozone oxidizes an amino acid called tyrosine that aids in forming Bet v 1. The Science Daily news report notes that this transformation sets in motion a chain of chemical reactions that involves reactive oxygen intermediates and can bind proteins together, altering their structures and their potential biological effects.

Researcher Christopher Kampf, PhD, says when this occurs, the cross-linked proteins can become more powerful allergens. The researchers also discovered that nitrogen dioxide appeared to alter the polarity and binding capabilities of Bet v 1 allergenic proteins. The researchers predict that this, in conjunction with ozone effects, may enhance the immune response of the body to these particles, especially in humid, wet, smoggy environments.

Kampf states, “Our research is showing that chemical modifications of allergenic proteins may play an important role in the increasing prevalence of allergies worldwide. With rising levels of these pollutants we will have more of these protein modifications, and in turn, these modifications will affect the allergenic potential of the protein.”