Aspiration of oropharyngeal or gastric contents into the lower respiratory tract can lead to respiratory diseases such as asthma, chemical pneumonia, and ARDS. Several compounds are  being tested for their protective actions against inflammation that leads to lung injury

The inhalation of oropharyngeal or gastric contents into the lower respiratory tract defines aspiration. Although common, aspiration can lead to a range of diseases, including chronic cough, reflux-aggravated asthma, chemical pneumonitis, infectious pneumonia, or acute respiratory distress syndrome (ARDS) with significant morbidity and mortality. Acid-initiated airway injury leads to an initial proinflammatory environment that most commonly resolves spontaneously. Resolution of acute inflammation is an active process under the control of specific chemical mediators. For example, cyclooxygenase (COX)-derived products are pivotal to both the initiation and resolution of inflammation.1 In experimental systems, COX-2–derived products increase 15-lipoxygenase (15-LO) and stimulate formation of the pro-resolving mediator lipoxin A4.2 The diverse pro-resolving actions of lipoxins suggest possible new therapeutic avenues. Here, we review aspiration, its sequelae, and recent insights into its pathophysiology.

Aspiration of Gastric Contents
Aspiration is defined as the introduction­ of foreign material into the larynx and lower respiratory tract. Aspiration can be “silent” or can result in clinical symptoms, namely cough, wheeze, and dyspnea.3 Risk factors for clinically important aspiration events include the amount of material aspirated, the frequency of aspiration, the type of material, and the host response. Recurrent or massive aspiration can result in diseases such as chronic cough, reflux-aggravated asthma, laryngeal-tracheal stenosis, pneumonitis, pneumonia, and ARDS.

Compromises in airway defense mechanisms, namely epiglottic and/or laryngeal function, that protect the lower respiratory tract are important risk factors for aspiration. These conditions can occur in the setting of depressed level of consciousness during sleep, anesthesia, cerebrovascular accidents, and drug overdose. Clinical studies have demonstrated that aspiration can occur during sleep in up to half of all healthy individuals.4 In 1946, Mendelson described a series of obstetrical patients receiving anesthesia who aspirated gastric contents, resulting in bronchospasm, pneumonia, or pulmonary edema.3 Patients admitted to tertiary care hospitals with a drug overdose and a Glasgow Coma Scale of less than 8 demonstrated an increased risk for aspiration pneumonitis.5 Aspiration also is common in patients with neurological impairments as evidenced by events in approximately 50% of stroke patients.6 Thus, compromise of airway defense mechanism from multiple etiologies dramatically increases a patient’s risk for aspiration. 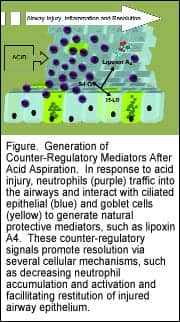 In addition to anesthesia, gastroesophageal reflux disease is a prevalent risk factor for aspiration. A clinical study of healthy volunteers undergoing laryngoscopy found evidence for intermittent acid reflux in more than 80% of subjects.7 Health care providers need to have a high index of suspicion for reflux disease, because most patients are unaware of laryngopharyngeal reflux. Traditional means of screening for reflux disease that rely solely on symptom reporting are insufficient. The relationship between reflux disease and cough is complex. Recurrent aspiration can lead to a chronic cough, but laryngopharyngeal reflux is not required for an acid-initiated cough. Of note, cough-precipitated reflux of acid is much less common.8

In asthma, aspiration of gastric acid can exacerbate preexisting airway inflammation.  Severe asthma is characterized by unregulated airway inflammation that is resistant to high doses of inhaled corticosteroids or prednisone. Forty-six percent of patients with severe asthma compared to only 5% of controls have evidence of reflux on barium swallow.9 More broadly, in 104 consecutive asthma patients with 24-hour esophageal pH probe and manometry, 82% had abnormal amounts of reflux with significantly more frequent and higher esophageal acid contact.10

In addition to the large and medium-sized airways involved in asthma, acid aspiration also can injure bronchioles, leading to a chemical bronchiolitis and pneumonitis. Aspirated gastric acid induces a chemical burn that triggers an acute inflammatory response. The severity of the lung injury is related to the amount and acidity of the inoculum.11 Severe injury often is seen with a pH less than 2.5, but also can occur at higher pHs. The severity of the acute lung injury is further modified by the host response. Proinflammatory mediators, such as IL-6 and TNF-a, increase within an hour of gastric acid aspiration.12 Other proinflammatory mediators such as leukotriene B4 prostaglandins, thromboxanes, IL-1, IL-8, and IL-10 also are implicated.13 These mediators serve as chemoattractants and activators of leukocytes furthering the acute inflammation.

Aspiration is not limited to the acidic contents of the stomach. Particulate matter, as well as other liquids, can be aspirated into the lower respiratory tract. In addition, the original aspiration can result in an infectious pneumonia if the inoculum contains sufficient amounts of colonizing oropharyngeal flora. Factors that augment the bacterial burden in the oropharynx, such as poor dental hygiene, lead to increased risk for aspiration pneumonia. Original studies identified the importance of anaerobic infections. In recent studies, the most commonly identified organisms are Streptococcus pneumoniae, Staphylococcus aureus, and gram-negative bacilli.14 Patients in intensive care units are at particularly high risk for aspiration and, consequently, aspiration pneumonia. Gastrointestinal dysmotility, supine position, depressed level of consciousness, and nasogastric intubation are common in the critically ill. Patients with recently removed endotracheal tubes also are prone to swallowing dysfunction secondary to alterations in upper-airway sensitivity or glottic dysfunction.15

The most severe complication of aspiration is ARDS, defined as the development of severe hypoxemia with a ratio of the partial pressure of arterial oxygen to the fraction of inspired oxygen of less than 200 in the absence of left heart failure. ARDS is characterized by exuberant lung inflammation and increased vascular permeability. Pneumonia and aspiration of gastric contents cause direct lung injury and have been identified as common risk factors for ARDS. In approximately half of patients, acute lung injury is caused by sepsis from a pulmonary source. Apart from sepsis, aspiration is the most common cause of ARDS.16 Injury to either the alveolar lining or the capillary endothelium can contribute to the pathogenesis of ARDS, but the degree of alveolar epithelial injury predicts clinical outcomes.13 Disruption of the epithelium leads to increased permeability, impaired fluid removal, and subsequent alveolar flooding.

At the cellular level, injured epithelial cells and alveolar macrophages secrete chemical mediators that attract and activate neutrophils. Neutrophils in turn release proteases, leukotrienes, oxidants, and other proinflammatory mediators. Proteases and reactive oxygen species from neutrophils and macrophages degrade alveolar lining fluids and injure type II pneumocytes, which leads to insufficient and inoperative pulmonary surfactant predisposing to alveolar collapse, even during tidal breathing.17 Within the interstitium and vascular endothelium, other mechanisms of lung injury also are active. Fibroblasts within the interstitium, stimulated by IL-1, produce procollagen, thereby expanding the extracellular matrix.13 In the microvasculature, circulating platelets are exposed to injured endothelium predisposing to in situ thrombi formation.18 Pulmonary edema, expanded interstitium, surfactant dysfunction, and thrombosis can all contribute to impairment of gas exchange in aspiration-induced ARDS.

As is seen in ARDS, the activated leukocyte and alveolar epithelium are central to the pathophysiology of asthma. An asthma exacerbation, often in the setting of acid aspiration, is characterized by an influx of inflammatory effector cells such as neutrophils and eosinophils. These cells become activated and release proinflammatory mediators into the airway. Activated leukocytes via the enzymatic actions of cytosolic phospholipase A2 release arachidonic acid from cellular membranes. Arachidonic acid is then available to COXs or LOs for conversion into bioactive products such as prostaglandins and leukotrienes. These bioactive lipid mediators are agonists for leukocytes, are vasoactive, and serve as potent bronchoconstrictors.

Resolution of Airway Injury and Inflammation
For resolution of airway inflammation, the leukocytic influx must be cleared from the lungs, the epithelium restored, and bronchial hyperresponsiveness controlled. The resolution of this inflammatory state is a highly coordinated process that relies on endogenous pro-resolving mediators. The first described mediators of resolution were lipoxins (LXs), also known as lipoxygenase interaction products. These products of arachidonic acid metabolism are distinct from prostaglandins and leukotrienes in structure and function. LXs are generated during cell-cell interactions at sites of injury or inflammation. In the lung, airway epithelial cells that contain 15-LO activity can interact with infiltrating leukocytes that possess 5-LO activity to generate LXs.19 Platelets display 12-LO activity and also can interact with leukocytes to convert leukotriene A4 to LXs.20 Thus, LXs serve as autacoids—rapidly formed at sites of inflammation to act locally in a cell-specific fashion. LXs act as potent stop signals for neutrophil chemotaxis, adhesion, and degranulation while stimulating monocyte locomotion and macrophage phagocytosis of apoptotic neutrophils. LXs also inhibit eosinophil chemotaxis and T cell activation.19 Recently, deficiencies in LX biosynthesis have been identified in aspirin-exacerbated respiratory disease, cystic fibrosis, and severe asthma. LX levels correlate with the degree of airflow obstruction (ie, FEV1% predicted), suggesting that these forms of severe airway disease are related, in part, to a decreased capacity to generate stop signals for inflammation.21

In addition to leukocytes, resolution of acute lung injury from either aspiration or ARDS requires restitution of the epithelium. Although the initial COX-derived PGs are proinflammatory, later COX-2 derived products are crucial to the resolution of acute lung injury. In an animal model of mild acute lung injury from selective left lung acid aspiration, neutrophils traffic into the lung with maximal cell numbers 12 hours after acid aspiration and spontaneous resolution by 72 hours. After acid injury, COX-2 expression in the lung increases markedly. Of interest, a COX-2 selective inhibitor or genetic deficiency significantly increases inflammation 48 hours after acid injury and slows restitution of epithelial responses. COX-2 derived PGs induce 15-LO expression in neutrophils, LX formation in vivo after acute lung injury, and expression of the LX receptors in bronchial epithelium.1 By enhancing LX biosynthesis and sites of action, COX-2 plays a pivotal role in orchestrating mucosal responses to injury.2

Summary
Aspiration induces a wide spectrum of respiratory diseases. The inciting injury to the airways establishes a proinflammatory environment. The inflammatory response to injury is a highly regulated process that is vital to lung health. Specific chemical mediators are elaborated both early to initiate inflammatory responses and later to engage resolution circuits that restore homeostasis. LXs are the first members of a growing class of pro-resolving mediators that now include protectin D1 and resolvins (derived from omega-3 fatty acids that are common in oily fish) as well as polyisoprenyl phosphates. Structural analogs of these compounds are being conceived and tested for their protective actions. Identification of natural pro-resolving mediators can provide insights into the pathophysiology of conditions such as acid aspiration and potentially offer new therapeutic strategies that amplify endogenous counter-regulatory pathways.

12. Chendrasekhar A. Evaluation of alveolar cytokine response to aspiration of gastric contents. The Journal of Applied Research in Clinical and Experimental Therapeutics. 2001; 1(1).