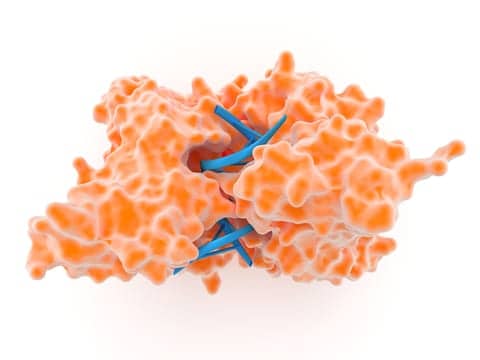 A study conducted by researchers at University of Kentucky Markey Cancer Center suggests that the targeting of a key enzyme and its associated metabolic programming may lead to the development of a drug to treat lung cancer.

The study collected metabolic data directly from more than 120 human lung cancer patients. The research team worked with other collaborators to measure the in situ activity of these two enzymes in patients with early stage lung cancer.

When they infused the patients with a glucose tagged with stable heavy atoms immediately prior to surgical removal of tumor tissue, they found that PC was selectively activated — in other words, PC expression may play an important role in the development of lung cancer, according to a Science Daily news report. The researchers used molecular genetic tools to reduce the amount of PC in human lung cancer cells and observed decreased cell growth, a reduced rate of tumor growth in mice, and a compromised ability to form colonies in soft agar.

The Science Daily news report indicates that a loss of PC also induced widespread changes in the central metabolism of the cell, suggesting a role for PC in early stage metabolic reprogramming. Researcher Teresa Fan says, “We now know much more about metabolic reprogramming of cancerous tissues in human patients, particularly that the activation of pyruvate carboxylase is important to lung cancer cell growth and survival.”

Fan adds, “Ultimately, figuring out how to target PC may help researchers develop new, more effective therapeutic strategies to improve upon current lung cancer treatments, which are limited and harmful.”

One Step Closer to a Breath Test for Lung Cancer