Salary Survey For the Love of the Job 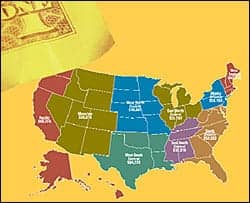 Respiratory therapists love their jobs. Why else would they stay in a position that some feel does not offer the same salary or respect as other allied health professions. “I would recommend my profession for the love of the job not because of what it pays,” commented one therapist who responded to RT’s annual salary survey.

And while enjoying one’s job makes for a rewarding day, it does not put food on the table. Fortunately, most RTs are not poverty-stricken, at least not according to the United States Department of Health and Human Services (HHS) poverty guidelines, which define poverty as one individual earning $9,800 annually in the contiguous United States (alternate figures are provided for multiperson households, as well as Alaska and Hawaii). According to RT’s salary survey, the majority of the 1,192 respondents earned between $40,000 and $70,000 last year, well above the poverty line, which has been true since RT first conducted the survey in 2003.

Unfortunately, new recruits have remained about the same, near 3%. “[It’s] extremely difficult to recruit RCPs. Schools [are] not putting out enough RCPs.” Even if they do, the new RCPs may not necessarily become old hands. “[There are] no dedicated students entering the field of respiratory therapy for the long term. It’s just a stepping stone to other medical careers, like PA [physician’s assistant] school, nursing, etc,” wrote another respondent, who blamed “dismal” salaries.

For the Love of Money
Many respondents agreed that salaries should be higher. “Starting pay is OK, but the long-term compensation does not compare to other professions. If I had been in another field for 20 years, my salary would be much higher,” commented one respondent. Another was more blunt: “The current level of pay being offered to RTs is downright criminal.”

Many compared their salaries to those in nursing, radiology, physical therapy, occupational therapy, and speech therapy and found them wanting. Said simply: “I feel our profession is grossly underpaid compared to other allied health positions.” But are they really?

Survey Says…
RT summarizes some of the survey statistics.

Job Market and Other Observations 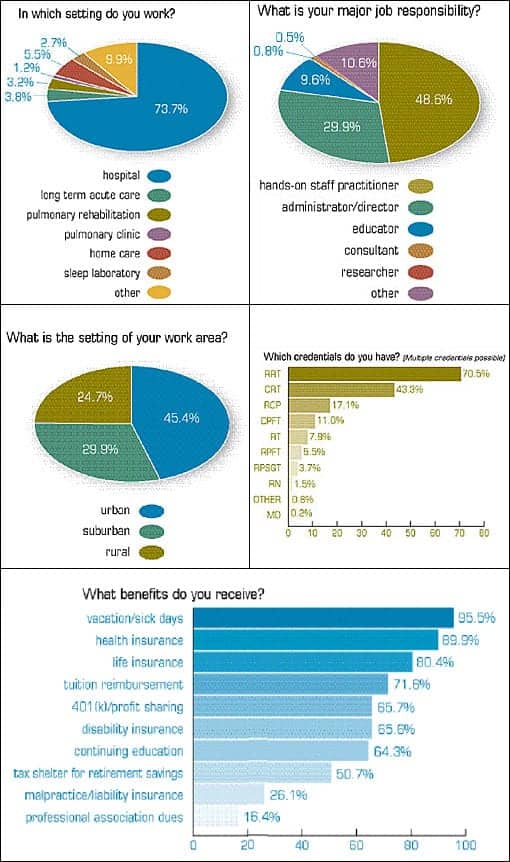 • Interventional radiological technologist is $56,088; and

Using either RT’s median salary of $54,000 or Salary.com’s median salary for a typical certified respiratory therapist in the United States of $41,637, complaints about unequal pay are justified in most cases.

But what to do about it? One respondent recommended more association involvement: “[We] need to have more RTs join AARC [American Association for Respiratory Care, Irving, Tex]. With this will come respect and with that comes responsibility. Then pay will increase.” Another suggested appealing to management: “Our department recently lobbied for and won a pay increase to bring us up closer to the San Francisco Bay area scale in an effort to fill our three part-time and two per diem positions.”

For the Good of the Industry
Quite a few respondents, 77.3% or 922, reported having open positions in their departments. Of this group, 71.1% have one to three openings, 14.8% have four to five; and the remainder are hiring even more. Both the AARC and the US Department of Labor Bureau of Labor Statistics (BLS) expect this need to grow.

The BLS states that respiratory therapists held about 118,000 jobs in 2004, with more than four out of five of them in hospital departments of respiratory care, anesthesiology, or pulmonary medicine.1 The majority of RT salary survey respondents also work in a hospital with nearly three quarters or 73.7% reporting this setting.

The field is expected to grow by 27% or more by 2014, according to the BLS.1 Factors include the “substantial growth in the numbers of the middle-aged and elderly population—a development that will heighten the incidence of cardiopulmonary disease—and because of the expanding role of respiratory therapists in the early detection of pulmonary disorders, case management, disease prevention, and emergency care.”1 Additionally, advances in inhalable medications and in the treatment of lung transplant patients, heart attack and accident victims, and premature infants will also increase demand for respiratory care services.1

As the need for these specialists grow, it is possible the demand will result in higher pay. Hopefully, it will also result in more respect; a number of survey respondents feel their work is not appreciated. One respondent felt that professionals were leaving the field as a result.

But in general, those providing respiratory care love their jobs. Most respondents (88.2%) noted they would recommend the profession to someone else. One respondent simply wrote: “29 years in the field and still loving it.”

Renee Diiulio is a contributing writer for RT. 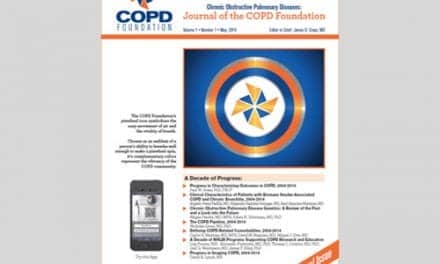 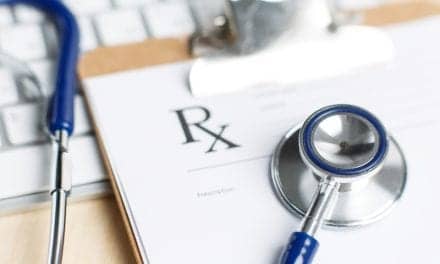