In our efforts to staunch the increasing prevalance of hospital errors, must protection of clinicians who report mistakes voluntarily conflict with the public’s right to know?

The bipartisan Patient Safety and Quality Improvement Act (S 720), unanimously passed this summer by the Senate Health, Education, Labor, and Pensions committee, would “make patient safety data privileged and confidential,” excluding it from “disclosure under the Freedom of Information Act…or any credentialing or licensing situation.” The bill is intended to allow health practitioners to report medical errors protected from the stigma of our “culture of blame,” as its cosponsor, Sen Judd Gree (R-NH), describes our current medical liability system. Its author, Sen James Jeffords (I-Vt), says that the bill would let providers report mistakes without fear of punishment, and patients would be its ultimate beneficiaries.

The unanimous, bipartisan support of the bill, aka the Medical Safety Bill, suggested that it might move through the Senate at a reasonable clip, despite qualified support from some representatives, among them Sen Edward Kennedy (D-Mass), who cautions the importance of guarding against protection of people who negligently or intentionally cause patient injury.

But the bill has been stalled, most likely for at least this year, by objections from the Consumers Union (CU), which claims that S 720 (and a House version, H 663) would undermine state disclosure laws. The bill, says the CU, defines “patient safety data” so broadly that it would include hospital infection rates in its definition, information that some states have worked specifically to make public.1

Illinois, for example, recently passed a mandatory reporting bill for hospital-acquired infections. A recent study found that postoperative bloodstream infections were the most serious of hospital injuries, and that they added an increased risk of death after surgery of 21.9%.2

The bill’s proponents are seeking to reconcile both the CU’s concerns and fundamental differences between the Senate and House bills. Meanwhile, the bill languishes behind other looming concerns, in particular the state of our current, lamentable medical health insurance system.

Other states have taken matters in hand regarding errors and accountability. Pennsylvania’s new independent Patient Safety Authority will collect data from errors and near-miss events. In Minnesota, hospitals must report any event from a list of 27 “never events” created by the National Quality Forum in Washington, DC. The creators of both systems acknowledge them as works in progress, but they are, at least, in progress. Barbara Balik, executive vice president of safety and quality systems for Minneapolis-based Allina Hospitals and Clinics, said that, if nothing else, the effort “will bring attention to serious events that national agencies say we need to fix, and fix immediately.”3 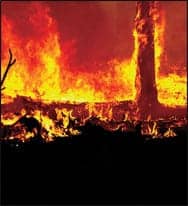 Things We Learned From the Fires