The New Science of CPR: Can We Get It to the Bedside? 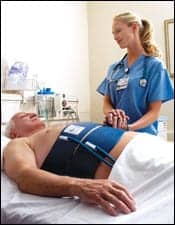 In a study on the use of semirecumbency, physicians and nurses who were interviewed agreed that this was an important strategy in preventing gastroesophageal aspiration.1 Despite the agreement on its benefit, clinical observations showed it was inconsistently used. When asked to explain this, the nurses reported it was because the physicians did not write the order. The physicians thought the reason was related to the nurses’ preferences. Regrettably, this type of disconnect occurs in many areas and diminishes the real benefit of science, its clinical application. This article focuses on another area where the science desperately needs to be brought to the patient’s bedside. That would be the new science of CPR.

The American Heart Association recently announced some changes that relate to the ventilation component of the resuscitation process.2 Providing ventilation in witnessed arrest outside of the hospital is now considered less important than performing “good chest compressions.” This is a relatively minor modification of current practice and should be fairly easy to implement. Two other changes were recommended some years ago and involve much more than changing the number of ventilations provided. They appeared in the 2005 guidelines3 and include the use of impedance threshold devices (ITDs) and controlled hypothermia.4 Although the Heart Association considers that the science to support these changes is substantial, reports that will be discussed later in this article indicate that these concepts have yet to be embraced on a large scale.

Another lesson teaches that the negative intrathoracic pressure associated with a spontaneous breath plays a role in maintaining cardiac output by increasing venous return to the heart. This concept led to the development of the ITD. An ITD is a single-use plastic appliance that is placed between the resuscitation bag and the patient’s mouth or endotracheal tube. During normal CPR, airflow is delivered into the lung and much of it is expelled as the patient’s chest is compressed. As the chest recoils, air is drawn in from the resuscitation bag. If an ITD is in place, air still flows into the chest each time the bag is compressed, but one-way valves built into the device prevent air from entering the chest during the upstroke or decompression phase. The vacuum that is created actively pulls blood back into the thorax. The net effect is that blood flow to the brain and heart increases substantially.6

An ITD device became commercially available in 2004, and, in 2005 (using the GRADE system), was given a class IIa recommendation by the American Heart Association. Impedance threshold devices have also been used as a means for increasing blood pressure in patients who were hypotensive. In the years that have followed its introduction, sales for ITDs have been positive but only in some areas of the country. Manufacturer’s estimates are that approximately 1,500 hospitals and EMS services currently use this product, which seems like a lot. Unfortunately, there are approximately 5,000 hospitals in the United States. Add to that the number of fire departments and public or private EMS agencies found across the country. The potential number of providers is probably in the tens of thousands. Taking this into account, the number of current users is not all that impressive.

The currently marketed ITD has one other feature that could be beneficial. It also has a timer/light on the top that flashes and gives the operator a visual cue to deliver a breath. The light flashes at a rate that will give the patient approximately 10 breaths per minute. When they first start using this device, many practitioners feel the patient is being ventilated too slowly. More likely, the staff are used to ventilating too quickly. In stressful situations, it is difficult for rescuers to judge how many breaths per minute are being delivered. One observational study of EMS personnel performing CPR showed a mean ventilation rate of 37 breaths per minute.10 They may also be encouraged by others to ventilate more quickly to improve the patient’s saturations. This is absolutely the wrong strategy. Adequate oxygenation is maintained by sustaining a normal ratio of ventilation and perfusion (V/Q). In low cardiac output states, the extra positive pressure from an increased respiratory rate worsens the V/Q and blood gases will not improve.

In the 1950s, Wilfred G. Bigelow, MD, experimented with the use of hypothermia in patients undergoing cardiac surgery. The original intent was to decrease the patient’s myocardial oxygen requirement. Although Bigelow’s studies were considered positive, additional work in this area did not seem to progress much at all until the 1980s when it was inadvertently shown to be helpful in resuscitating a dog after prolonged cardiac arrest.11

More recently, this concept has been applied for improving the neurological outcomes of patients who have arrested and remained comatose after circulation has been restored. An Australian group looked at outcomes of patients who had arrested outside the hospital.12 Hypothermia was started by responding paramedics. Twenty-one of the 43 patients (49%) had a “good” outcome, ie, discharged to home or to a convalescent facility. By comparison, the normothermic group had good outcomes in only nine of 34 (26%).

In a larger study,13 patients who had sustained cardiac arrest due to ventricular fibrillation were randomly assigned to two groups. Control group patients received standard treatment and were maintained at normothermic levels. The experimental group received similar treatment, but their body temperature was maintained at 32º to 34ºC for a period of 24 hours. A number of exclusion criteria were used and are detailed in the article. The selected patients were cooled by an externally applied blanket. If the patients did not reach the target temperature with these methods, ice packs were applied. The patients were sedated and pharmacologically paralyzed to prevent shivering. Seventy-five of the 136 patients in the hypothermic group had a favorable neurological outcome. Only 54 of the normothermic group (n = 137) were judged to have the same type of outcome. There were no significant side effects reported from the hypothermia group, but there was a trend toward more cases of sepsis.

There are several products on the market that have been used to provide this form of therapy. One of them is a helmet worn by the patient. Others involve wrapping the patient in a device that circulates cold water. Other methods used include the infusion of iced saline, gastric intraperitoneal or bladder lavage, or even local cooling with ice packs.

Surveys have been conducted to try to reconcile the reasons for not implementing mild hypothermia.14 Physicians from the United States, the United Kingdom, and Finland were surveyed. Although the number of respondents was not particularly high, a somewhat surprising 75% of them from the United States said they do not use controlled hypothermia. A slightly smaller percentage of the European group, 64%, said they did not use this therapy. The reasons listed included “not enough data” (48%), “too technically difficult” (35%), “have not considered it” (35%), and “not part of advanced cardiac life support” (41%). Those who conducted the survey admit the study did have limitations, but it is interesting to note that 6 years after the Australian and European studies were published, utilization remains at such a low level. Researchers are still addressing a number of procedural issues:

All of these concerns need to be addressed, but the basic concept and the supporting evidence for this type of therapy are compelling.

The low utilization rates of the ITD are equally curious. As previously mentioned, the most recent guidelines published by the American Heart Association give it a IIa rating. It’s hard to imagine a code being run without having used epinephrine, atropine, or amiodarone, yet none of these drugs have as high a level of recommendation as the ITD.3

Perhaps hypothermia and ITDs are just traveling the road that many new concepts seem to follow. High-flow nasal cannula therapy, closed-circuit suction systems, supraglottic airways, and even noninvasive ventilation were available for several years before they became widely accepted.

There is little argument that sudden cardiac arrest is a leading cause of neurological injury and death in the United States and other countries around the world. Research as described in this article has identified two new measures that offer the potential for significantly altering the outcomes associated with this problem. The American Heart Association describes CPR as a process involving skilled providers who are ready, willing, and equipped to act. Based on the science currently available, the use of ITDs and controlled hypothermia should certainly be included in what the providers bring to the bedside.

Threats to the Profession: Scared About Nursing – Think Again