One of the biggest fears that individuals with neuromuscular weakness have is getting a cold. This fear is not unfounded, as viral respiratory infections are poorly tolerated in individuals who do not have adequate cough clearance. They can lead to bacterial pneumonia, respiratory failure, and even death. At least, this used to be the case, prior to the advent of modern respiratory care for such individuals. This review will cover recent literature about secretion management in patients with neuromuscular weakness.

Secretion management is a critical aspect of the respiratory care of patients who lack respiratory muscle strength. Airway clearance is the outcome of two linked processes: mucociliary clearance and cough clearance. Mucociliary clearance refers to the action of the mucociliary “escalator,” which propels particulate matter, mucus, and bacteria from the periphery of the lung to the central airways. This requires functioning cilia on the airway epithelium as well as a normal fluid layer in which the cilia function (the airway surface liquid). It is rare for patients with neuromuscular weakness to lack adequate mucociliary clearance. This is one reason that therapies directed toward improving mucociliary clearance such as high-frequency chest wall compression, manual chest physiotherapy, and airway oscillation devices are ineffective in neuromuscular disease. The impairment in patients with neuromuscular diseases (such as Duchenne muscular dystrophy, spinal muscular atrophy, amyotrophic lateral sclerosis, spinal cord injury, etc) is in cough clearance.

To understand how to aid those with impaired cough clearance, it is useful to review the physiology of coughing.1 Cough is a complex process that begins with a trigger of cough receptors in the respiratory tract (irritation). This stimulation triggers a deep inspiration (inspiratory phase) to get air behind the secretions to be cleared. Next, the airway opening is closed at the glottis. This allows the next phase, called the compressive phase, in which the abdominal musculature contracts, thus forcing the abdominal contents against the diaphragm, increasing intrathoracic pressure and narrowing the central airways. Finally, during the expulsive phase, the glottis is opened, releasing air at high velocity.

All five stages of coughing can be impaired in patients with neuromuscular weakness. Encephalopathy, for example, may lead to a lack of response to irritant receptors, thus absent cough reflex. Those with isolated weak diaphragm (as can occur in phrenic nerve injury), as well as those with diffuse muscular impairment, can have diminished inspiratory phase. Impairment of glottic closure can occur when there is bulbar involvement (ALS, late in Duchenne MD). Of course, if a tracheotomy is present, the airway opening cannot be closed. Loss of the compressive phase can occur in those patients who cannot close the glottis as well as those with weak muscles of expiration (rectus abdominis, obliques, and internal intercostals). These same factors will impair the expulsive phase.

Manually assisted cough (MAC) has long been used to improve cough clearance.2-4 This form of assisted coughing involves insufflating the patient with a deep breath and then using either an abdominal thrust or a thoracic squeeze to augment the patient’s own cough. The deep insufflation allows the elastic recoil of the lungs and chest wall to aid in the expiration, while an abdominal thrust or thoracic squeeze aids in the expulsive phase (and, to a lesser extent, the compressive phase). Manually assisted cough relies on the ability of the patient to keep the glottis closed. A cooperative patient can aid in air stacking with an AMBU bag. Occasional patients are able to use glossopharyngeal breathing to air stack. Finally, the deep insufflation can be performed with a mechanical ventilator (if one is using a volume mode of ventilation). For the manual augmentation to be successful, there needs to be as deep an insufflation possible (this is referred to as maximal insufflation capacity).2 Following this deep insufflation, there is abdominal thrust and/or thoracic squeeze. The abdominal thrust is, in essence, a Heimlich maneuver, so this technique should not be performed if the patient has a full stomach. Many patients prefer a thoracic squeeze, but the effectiveness of this maneuver is limited if there is decreased chest wall compliance, as is common in Duchenne MD and scoliosis. It is important to stabilize the chest wall with one’s arm when performing the abdominal thrust. Obviously, one must be careful not to injure abdominal organs or cause gastric reflux.

Mechanical insufflation-exsufflation (MI-E) has been in use since its first description in 1952 by Barach et al and Bickerman et al.5,6 The first mechanical insufflator-exsufflator was created in response to a need created by the polio epidemic of the 1950s. The first commercially available device was called the Cof-Flator. This device was based on a vacuum cleaner motor and used a valved mechanism that allowed either positive or negative pressure to be applied to the airway. Use of this device (and experience with mechanically assisted cough) waned as the polio epidemic waned. The device was not manufactured for decades. In 1993, John Bach, a physiatrist at the University of Medicine and Dentistry of New Jersey, convinced Jack Emerson of J.H. Emerson to bring this previously approved device back, in a redesigned model called the “In-exsufflator.” Bach’s initial reports demonstrated that the device could simulate an effective cough.3,7 Since these initial reports, there has been a slowly growing body of literature in support of this modality.8-12 Mechanically assisted coughing, as part of a protocol-driven respiratory care program, has been shown to improve outcomes in patients with neuromuscular weakness, offering hope to a very vulnerable population at great risk for respiratory complications.13-15 Despite an increasing body of peer-reviewed literature, private insurance companies have been slow to accept this modality of therapy. Medicaid programs usually cover this therapy for patients with weak cough secondary to neuromuscular weakness. Approximately 65% of private payors at this time are not offering coverage for MI-E. The American Thoracic Society has endorsed this modality of therapy in its 2004 consensus guidelines on the respiratory care of the patient with Duchenne MD.16 This statement has been used by numerous insurance companies in making decisions regarding MI-E in the United States.

Despite increasing acceptance of MI-E for airway clearance in patients with neuromuscular disease, there remains a lack of agreement on settings. The literature varies widely on this point, with pressure settings ranging from 15 cm H2O to 45 cm H2O (insufflation and exsufflation pressures). Fauroux et al12 demonstrated greater efficacy at higher settings (up to peak pressures of 45 cm H2O). It is also essential to note that during illness, MI-E settings may need to change as lung mechanics change.17 To learn more about MI-E, the reader is referred to three recent excellent reviews on the topic.18-20

Aiding secretion clearance in the neuromuscularly weak child differs from that in the adult when the patient is uncooperative. Infants and young children with spinal muscular atrophy type I, for example, develop insufficiency of cough clearance very early in life. The pressures required to aid in cough clearance in this population have not been established. High inflating pressures are a risk for pneumothorax and should be avoided. On the other hand, pressures generated during crying during infants have been demonstrated to exceed 100 cm H2O!21 Because of the increased compliance of the chest well, prolonged application of negative pressures can deflate the lung below residual volume and lead to shunting through the lung and arterial desaturation. The rule in using MI-E in infants is to start a low levels and short times (such as +20/-20 and inspiratory and expiratory times of 1 second). These can be gradually increased as tolerated, using chest wall motion and a pulse oximeter as guides. Tracheostomy status does not prevent use of MI-E in any age. 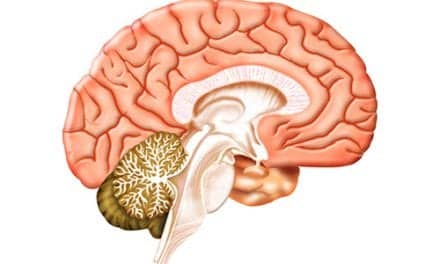 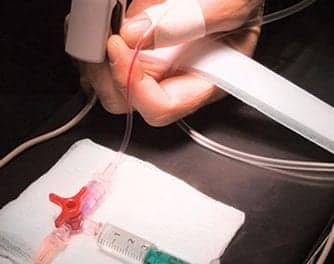