Congestive heart failure (CHF) is the term used to describe the physiological state in which cardiac output is insufficient. It is the fastest growing cardiovascular disorder in the United States, one of only a few increasing in incidence and prevalence.1 As the population ages, the incidence of congestive heart failure is rising dramatically; it is estimated that CHF affects about 10 per 1,000 people age 65 and older.

In the United States, approximately 6 million people suffer from heart failure, with an additional 670,000 new cases of heart failure diagnosed each year.2 Heart failure is the most common reason for hospitalization in the elderly and carries an annual cost of approximately $39 billion.2 In the Medicare population, heart failure is also the most common reason for hospital readmission within the sensitive period of 30 days following discharge.3 This is of growing importance as we enter a new era of clinical accountability, one in which a major health care payor such as Medicare imposes financial penalties against hospitals with a high incidence of readmissions.

Congestive heart failure sits at the top of a list of chronic, progressive diseases that produce significant burdens on patients, families, and the health care system. In addition to the obvious financial burdens, there are significant quality-of-life issues faced by patients with CHF, along with their families and caregivers. Like many other chronic and progressive diseases, in CHF it is essential that individuals at risk be diagnosed and treated early.

Congestive heart failure is a progressive heart disease caused by myriad factors, including coronary artery disease, hypertension, congenital heart disease, chronic arrhythmias, and chronic obstructive lung disease. Like other chronic, progressive disorders, once diagnosed, CHF is classified by the level of cardiac impairment. The left, right, or both sides of the heart can be affected. Right-sided heart failure (cor pulmonale) results in ineffective blood flow into the pulmonary vasculature, and left-sided heart failure results in ineffective blood flow to the body. The Table lists the four heart failure classes, definitions, and basic treatment goals.

The disorder is most often medically managed with myriad drug therapies aimed at improving cardiac performance, slowing progression, and reducing symptoms. Common drug therapies include, but are not limited to, beta blockers, angiotensin converting enzyme (ACE) inhibitors, angiotensin receptor blockers (ARB), various diuretics, selective vasodilators, calcium channel blockers, and anticoagulants. As the disease progresses, chronic treatments can become more comprehensive and include more drug combinations, supplemental oxygen therapy, and both noninvasive and invasive ventilation support. Because most of the severe cardiopulmonary symptoms do not present until the later stages, early assessment and treatment is often overlooked.

Cheyne-Stokes respiration (CSR) is an abnormal respiratory pattern associated with CHF, and, while many clinicians are familiar with CSR, particularly in end-stage cardiopulmonary disease, mild CSR may be present in many stable, early-stage asymptomatic patients.

Cheyne-Stokes respiration is characterized by a crescendo-decrescendo alteration in tidal volume that is separated by periods of apnea or hypopnea. The crescendo-decrescendo breathing alterations in CSR compensate for the changing serum partial pressures of oxygen and carbon dioxide that result from sluggish circulation with timing delays between the pulmonary artery and central and peripheral chemoreceptors. Up-regulation in peripheral chemoreceptor sensitivity results in rapid compensatory changes in respiratory drive in response to small changes in serum oxygen and carbon dioxide. Although the carbon dioxide levels rise and fall in relation to changes in minute volume, the mean CO2 level remains below normal.

Hypoxia clearly plays a central role in the initiation of CSR, as evidenced by the attenuation of periodic breathing following administration of supplemental oxygen. Gottlieb and colleagues studied hemodynamic stress associated with heart failure and concluded that prevention of hypoxia is especially important in this at-risk population of patients.4

Patient complaints that may be suggestive of nocturnal hypoxemia may be easily confused with other comorbid symptoms, and, therefore, a typical outpatient exam is not adequate to detect sleep-related symptoms. Resting and ambulating blood oxygen levels are not indicative oxygen levels during sleep. Nocturnal desaturation is directly correlated to sleep disturbance and CSR in stable CHF patients with treated heart failure and no daytime evidence of hypoxemia.5

Diagnosing nocturnal hypoxemia is relatively simple and inexpensive, and it can be easily performed in the patient’s home. Although complete polysomnography will identify numerous sleep disturbances and should be used if more serious sleep disorders are suspected, the use of a single, overnight pulse oximetry study can serve as an adequate diagnostic tool for identifying mild CSR and hypoxemia in patients with CHF.5 Not all clinicians agree on the definition of nocturnal hypoxemia, although the Medicare coverage policy for nocturnal home oxygen therapy6 serves as a standard of practice: “An arterial PO2 at or below 55 mm Hg, or an arterial oxygen saturation at or below 88 percent, for at least 5 [cumulative] minutes taken during sleep for a patient who demonstrates an arterial PO2 at or above 56 mm Hg or an arterial oxygen saturation at or above 89 percent while awake.”

PAP therapies, in the forms of CPAP, bi-level, and, most recently, adaptive servo-ventilation (ASV), have been used to treat mild to severe CSR. Studies focused on the effectiveness of these therapies have met with mixed results, although in advanced CSR, there is a clear benefit, particularly for treatment with ASV. These mixed outcomes may, at least in part, be attributed to the targeting of therapy to treat symptoms (irregular breathing) rather than the cause (poor oxygenation) of those symptoms.

The best, most effective therapy is of no value if patients fail to adhere to it. Successful, effective treatment of CSR is an issue of practical comfort and convenience for the patient. Buckle et al13 found that most of the CHF/CSR patients treated with CPAP did not tolerate the therapy and they would not have accepted long-term therapy even if it had shown some benefit to them. CPAP compliance has long been a concern, with data suggesting about 50% of CPAP users are noncompliant. Although these studies are primarily directed at the treatment of obstructive sleep apnea, they highlight issues such as air leaks, nasal and sinus discomfort, pressure sores, and others that drive patients away from adhering to therapy. Low flow oxygen therapy is much more familiar and less intrusive than PAP, particularly when it is administered as a nocturnal-only therapy. It is relatively easy for the patient to use and is not associated with the numerous side effects and patient complaints recognized in PAP therapies.

Stable, normoxic CHF patients may have undiagnosed CSR with associated nocturnal hypoxemia. Diagnosis and treatment are relatively simply and can be employed in the outpatient setting and in the patient’s home via overnight pulse oximetry. Patients with stable CHF demonstrating nocturnal desaturation may be ideal candidates for early treatment with low flow nasal oxygen therapy. As the disease progresses, additional and more comprehensive therapies, such as ASV, may be integrated into the treatment plan. 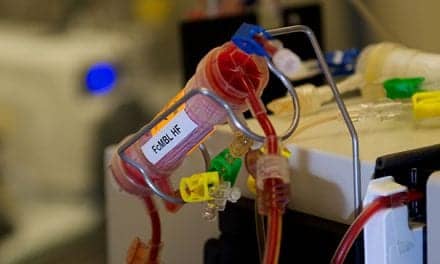