Several new pharmaceuticals are being developed for the treatment of COPD and asthma. Respiratory therapists need to be aware of these drugs to continue offering the best patient care.

Pharmaceutical companies are always doing research and constantly looking for new drug-based cures, new ways to relieve symptoms, new delivery devices to administer their medications, and improvements in medications in order to reduce side effects, make the drugs more targeted, and improve safety. Through the years, we have seen tremendous growth in the medications used in pulmonary cases and the changes will continue to roll out as research pushes forward. Several new drugs are coming forward that are intended as maintenance drugs and not considered rescue medications. This article will take a look at the new medications that are coming out from the research centers and discuss the need for RTs to keep up with the changes.

The most frequently used inhaled medication (besides oxygen) for relief of symptoms that are common to both asthma and COPD is albuterol, which is classified as a short-acting beta-2 agonist (SABA). Another commonly used short-acting drug is ipratropium bromide, which is classified as a short-acting muscarinic antagonist (SAMA). Ipratropium is the only SAMA currently available. Other medications found in the SABA classification include levalbuterol, terbutaline, and pirbuterol. COPD patients often use the combination albuterol/ipratropium in a single device to get relief from their symptoms. Many of the drugs that are expected to be released soon fall into four classifications—two of these classifications are specifically designated as “long-acting.”

Long-acting beta agonists (LABA) stimulate the beta-2 receptors and bring about “active” bronchodilation. Long-acting muscarinic antagonists (LAMA) block the muscarinic receptors to bring about “passive” bronchodilation (by preventing bronchoconstriction). Newer inhaled corticosteroids (ICS) are coming that help fight inflammation in the airways. Other new drugs that should be available soon are classified as monoclonal antibodies, which affect the pathways leading to the pathology of inflammation, and bronchospasm. The final classification for the new drugs is enzyme inhibitors—these act on an element found in the inflammatory pathway to reduce the incidence. Unlike the majority of current long-acting medications, several of the new drugs offer the advantage of being a once-a-day treatment, rather than twice-a-day. This advantage may improve patient adherence to their COPD or asthma treatment plan.

All of the drugs discussed in this article are being marketed for patients with COPD, with the exception of one, which is in the pipeline for asthma. However, as time and research move on, some of these drugs have the potential to cross over from one disease to the other, if the outcomes support the change. Keep in mind that drug manufacturers that are developing new medications spend millions of dollars in research and development but expect to tap into a multibillion-dollar market should one or more of these new drugs get through the approval process and make a significant difference in treating chronic diseases.2 Table 1 offers a summary of the medications in this article. 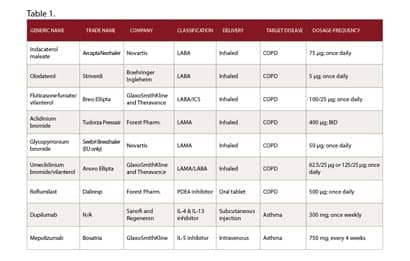 Indacaterol maleate, also known as Arcapta Neohaler from Novartis, is a LABA medication similar to other LABAs such as salmeterol, formoterol, and arformoterol. However, unlike the other LABA drugs, this drug is prescribed as a once-daily maintenance drug for use in COPD. Indacaterol is not recommended for use in asthma and carries a similar warning as the other LABA drugs mentioned above, which states that these drugs are reported to increase the risk of asthma-related death.2 However, there is ongoing debate about this warning for LABAs and asthma.3 As seen in other medications working through the approval process with the US Food and Drug Administration (FDA), indacaterol was approved in Europe for COPD prior to approval in the United States and although approval was sought for two strengths (75 and 150 µg), only the 75 µg dose was approved by the FDA.4

Olodaterol, offered by Boehringer Ingelheim as Striverdi, is also a LABA treatment for COPD. The medication is expected to be administered with the Respimat inhaler, a new inhaler design from Boehringer used with the combination albuterol/ipratropium bromide. Olodaterol is expected to be prescribed as a once-daily inhalation treatment for the maintenance of bronchodilation.3,5,6

Fluticasone furoate/vilanterol, known as Breo Ellipta and offered by GlaxoSmithKline and Theravance, is the combination of a new ICS (fluticasone furoate) mixed with a new LABA (vilanterol). All three of the currently available LABA/ICS combination medications—fluticasone proprionate/salmeterol xinafoate (Advair), budesonide/formoterol fumarate dihydrate (Symbicort), and mometasone furoate/formoterol fumarate dihydrate (Dulera)—have been prescribed for twice-a-day administration. The new combination LABA/ICS containing fluticasone furoate/vilanterol (Breo Ellipta) will offer more convenience as a once-a-day treatment for maintenance of COPD.1,3 The combination is administered as a dry powder using a novel dry powder inhaler (the details concerning the device have not been released). Breo is not to be prescribed for patients with asthma according to the manufacturer. It is expected to be on the US market in the third quarter of 2013 according to the GlaxoSmithKline website.7-9

A newcomer in the pharmaceutical approach to fighting bronchospasm, aclidinium bromide is offered by Forest Pharmaceuticals as Tudorza Pressair. Aclidinium bromide is classified as a long-acting muscarinic antagonist (LAMA), which blocks the parasympathetic signal to the M3 receptor on the bronchial smooth muscles. As a result, the bronchial smooth muscle does not constrict and bronchospasm is reduced. It is recommended for twice-daily administration. Currently, there is only one other LAMA on the market (tiotropium bromide, trade named Spiriva), which is prescribed as a once-a-day administration. Aclidinium bromide is indicated for use in COPD and has not been approved for use in asthma.10

Also known by its trade name Anoro Ellipta from GlaxoSmithKline and Theravance, umeclidinium bromide/vilanterol is a combination LAMA/LABA that could be available on the US market very soon. This drug combination will be administered as a once-daily treatment for COPD. Umeclidinium is a new LAMA medication and vilanterol is a new LABA medication. The new LAMA/LABA combination has acquired a new descriptive term: MABA, for muscarinic antagonist and beta-2 agonist.13 This new combination will be more convenient for patients to self-administer and combines an “active” bronchodilator, which stimulates the beta-2 receptors, with a “passive” bronchodilator, which blocks the muscarinic pathway to stop bronchoconstriction.

Roflumilast, known as Daliresp from Forest Pharmaceuticals, is an oral medication administered as a 500 mcg, once daily oral tablet for COPD. This drug is classified as a phosphodiesterase 4 (PDE4) inhibitor. By inhibiting PDE4, roflumilast has the ultimate effect of reducing cellular inflammatory activity.14 Roflumilast is not a bronchodilator and is not for treatment of acute bronchospasm. It is labeled as “a treatment to reduce the risk of COPD exacerbations in patients with severe COPD in association with chronic bronchitis and a history of exacerbations.”15

Dupilumab, available from Sanofi and Regeneron, is classified as a monoclonal antibody and an IL-4 & IL-13 inhibitor for use in patients with moderate-to-severe asthma with elevated eosinophils. It is injected subcutaneously once-a-week in a 300 mg dose. Research is ongoing with this medication; it is still in the process of evaluation and will possibly be approved for release sometime in the future.16 Meanwhile, mepolizumab, offered by GlaxoSmithKline as Bosatria, is another drug in the monoclonal antibody classification that targets IL-5. This is an intravenous medication that is administered once every 4 weeks.17 There is currently only one drug on the market that is classified as a monoclonal antibody: omalizumab, known by its trade name Xolair from Genentech and Novartis Pharmaceuticals.

Research is ongoing for several other monoclonal antibodies, and these medications may prove to be useful in patients with moderate-to-severe asthma who are not well-controlled on high-level inhaled and/or oral medications (eg, those taking medium to high-dose ICS, LABA, SABA, and leukotriene receptor antagonists). Monoclonal antibodies interrupt the inflammatory pathway by acting against various mediators in the cytokine family called interleukins (such as IL-4, IL-5, IL-8, IL-9, or IL-13). Other monoclonal antibodies act against tumor necrosis factor-alpha (TNF?) or act against CD4 cells (T-helper cells). These cytokines signal the body’s immune system to respond to an allergen or irritant with the end result being inflammation. By stopping these pathways, monoclonal antibodies reduce the inflammatory response.18

Combination drugs using LABA/ICS and soon-to-be-released LABA/LAMA are helping to change the approach for COPD and asthma treatment. In addition, a new classification of pharmaceuticals is being investigated that involves the combination of a third drug, called LABA/ICS/LAMA. This triple drug combination offers a three-way attack on bronchospasm and dyspnea, and more research on its efficacy should be available in the near future.10

Many new drugs are on the horizon for COPD and asthma treatment and respiratory therapists need to be aware of these medications and their delivery devices. By staying up-to-date on what medications are available and in the pipeline, RTs will continue to help lead the way for providing the best care for these patients. RT

Bill Pruitt, MBA, RRT, CPFT, AE-C, FAARC, is a senior instructor and director of clinical education in the Department of Cardiorespiratory Sciences, College of Allied Health Sciences, at the University of South Alabama in Mobile. Pruitt also works as a PRN therapist at Springhill Medical Center and volunteers at the Victory Health Partners Pulmonary Clinic in Mobile. For further information, contact [email protected].

Case Study: Cannabis Allergy in a Child with Severe Asthma