Accurate measurement of delivered tidal volumes in infants and children is essential during mechanical ventilation.

An accurate determination of the tidal volume (Vt) delivered to a patient’s lungs is essential when mechanically ventilating infants and children. Considering the small Vts used in ventilating infants and young children, small inaccuracies in Vt determination may result in significantly adverse conditions. Many conventional ventilators measure Vt at the expiratory valve. The determined values of these ventilators are often used clinically for important patient-care decisions; however, due to multiple circuit variables (such as circuit compliance, heaters, in-line suction devices, secretions, and condensation), the Vt measured at the expiratory valve of a ventilator does not accurately represent the Vt truly delivered.

A determination of Vt at the expiratory valve of a ventilator does not compensate for the volume of gas lost due to the distensibility of the ventilator circuit, nor does it compensate for the many different variations in the circuit setup. Since a significant volume of the gas that is delivered by the ventilator may be lost due to circuit conditions, it is essential to measure the Vt that reaches the endotracheal tube accurately in infants and small children. Vt determination at the endotracheal tube is more likely to represent the actual Vt of the patient’s lungs accurately than is Vt measured at the expiratory valve of the ventilator.

The volume of gas lost due to distensibility of the ventilator circuit is partially attributable to the compliance of the circuit. The compliance factor of a ventilator circuit is printed on its package or can be obtained from the circuit’s manufacturer. To determine the actual Vt delivery, one can employ a mathematical equation to correct for the circuit’s compliance. Theoretically, the effective Vt is defined as the Vt measured at the expiratory valve minus the volume of gas lost due to the distensibility of the circuit, calculated as the figure for peak inspiratory pressure minus positive end-expiratory pressure (PEEP) multiplied by circuit compliance.1 This equation, however, is based on a circuit-compliance factor that is derived using the circuit as it is packaged at room temperature in a manufacturing facility. The circuit-compliance factor does not consider uncontrolled variables such as heaters, in-line suction devices, adapters for end-tidal carbon dioxide monitors, changes in temperature, secretions, or condensation. Therefore, calculating the delivered Vt using an expiratory-valve measurement and the circuit-compliance factor would not be expected to give an accurate determination of the Vt actually delivered to the patient’s lungs. When Vts are measured using a pneumotachometer positioned between the ventilator circuit and the endotracheal tube, the ventilator circuit’s compliance and the confounding circuit variables are no longer pertinent factors.

The Vt values determined from both the expiratory valve and the pneumotachometer were bench tested to determine the validity of the values measured. These data were collected using a 15-cm noncompliant ventilator circuit with no distensible volume and no confounding variables. Data were obtained for both pressure-control ventilation and volume-limited ventilation. No significant differences were seen between the values calculated at the expiratory valve and the values determined by the respiratory mechanics monitor using a pneumotachometer placed at the endotracheal tube (P=.72). Thus, both monitoring methods accurately determine the volume of gas that passes through the monitoring device. The difference that was demonstrated in the study by Cannon et al2 was a result of the different location of the Vt measurement, not the device itself.

If the actual volume delivered to the lungs of critically ill infants and young children is not accurately known, the patient may be at risk for atelectasis, hypoxia, and hypercapnia. The presence of hypercapnia may or may not have clinical implications, depending on the clinical status of the patient; however, the development of atelectasis and hypoxia is likely to be a problem. If inadequate Vts are used and atelectasis develops, then increased airway pressures may be required to recruit the collapsed lung regions subsequently. This increase in airway pressure may increase the risk of secondary lung injury through the mechanism of shear injury.3,4 A confounding variable in this clinical scenario may be PEEP. An appropriate level of PEEP may prevent the development of atelectasis; however, ideal PEEP titration in small infants with high respiratory rates and dynamic pressure-volume curves is often difficult.

On the other hand, the clinician may attempt to compensate for the expected discrepancy between expiratory valve and endotracheal-tube Vt measurements by increasing the ventilator’s set delivered Vt for a given patient. Without an accurate determination of the delivered Vt at the endotracheal tube, however, the risk of overcompensation exists. Such overcompensation could produce overdistension, resulting in volutrauma and secondary lung injury.3,5-7 PEEP may again be a confounding variable; however, in this case, the use of excessive PEEP may further exacerbate the presence of overdistension.8

The accurate determination of delivered Vt, regardless of the PEEP level used, is essential in ventilating infants and young pediatric patients. With the use of a respiratory mechanics monitor and a pneumotachometer placed at the endotracheal tube, a more reliable measurement of the effective Vt that is actually delivered to a patient’s lungs can be obtained. 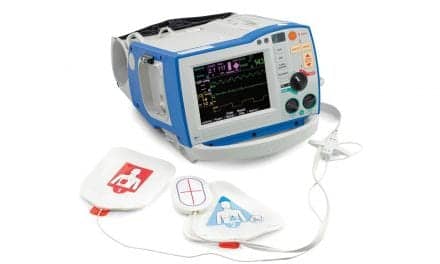