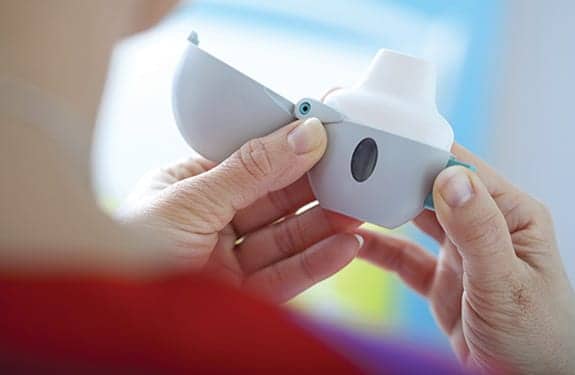 Asthma-COPD overlap syndrome (ACOS) accounts for approximately 15-25% of all obstructive airway diseases, but distinguishing between ACOS and asthma or COPD alone can be a challenging diagnosis. Asthma and chronic obstructive pulmonary disease (COPD) are common lung diseases that cost billions of dollars in healthcare-related expenses every year. Both diseases are also capable of causing death. According to the CDC Fact Sheet on Asthma, in relation to the impact on the nation, asthma costs $56 billion each year with the average annual cost of care for a child running $1,039 (from 2009 figures).

One in 11 children and one in 12 adults have asthma, according to the CDC information. Hospitalizations due to asthma hit 479,300 in 2009 and there were 1.9 million ED visits. The CDC calculated that in the last decade, the proportion of people with asthma in the United States increased by almost 15%.1

Turning to COPD, this chronic lung disease occupies third place for leading cause of death in the United States and is predicted to move up to become the third leading cause of death worldwide within the next 5 years. Yet 50% of the patients who have this disease have not been diagnosed.2-3 In 2010, COPD costs were tagged at $50 billion. It is estimated that 12 million people have COPD in the United States and the average annual costs are estimated to be $4,000 per patient.3

When these two lung diseases occur concurrently in a patient, the condition is referred to as asthma-COPD overlap syndrome, or ACOS. Awareness of this syndrome is increasing and strategies for how to best manage this issue are being evaluated. It has been noted that: “There is broad agreement that patients with features of both asthma and COPD experience frequent exacerbations, have poor quality of life, a more rapid decline in lung function and high mortality, and consume a disproportionate amount of healthcare resources than asthma or COPD alone.”4

Distinguishing asthma versus COPD versus overlap syndrome can be difficult and becomes even more problematic in older patients and in those who smoke. An excellent resource for the topic of ACOS is found in the Global Initiative for Chronic Obstructive Lung Disease (GOLD) guidelines in the chapter called: “Diagnosis of Diseases of Chronic Airflow Limitation: Asthma, COPD, and Asthma-COPD Overlap Syndrome (ACOS).”5 The chapter represents a consensus of the GOLD and GINA (Global Initiative for Asthma) guidelines and is based on the joint review and approval of the science committees of these two groups. This article will examine ACOS and discuss the current evidence regarding diagnosis and management.

The ACOS guidelines from the GOLD guidelines provide definitions of COPD, asthma, and ACOS. COPD has been defined as: “A common preventable and treatable disease, characterized by persistent airflow limitation that is usually progressive and associated with enhanced chronic inflammatory responses in the airways and the lungs to noxious particles or gases. Exacerbations and comorbidities contribute to the overall severity in individual patients.”5

In the same guidelines, asthma has been defined as: “A heterogeneous disease, usually characterized by chronic airway inflammation. It is defined by the history of respiratory symptoms such as wheeze, shortness of breath, chest tightness and cough that vary over time and in intensity, together with variable expiratory airflow limitation.”5

Overlap syndrome is found in approximately 15% to 25% of the obstructive lung diseases,6 but research in this syndrome is scarce. Much of the research dealing with COPD has excluded patients with asthma and vice-versa, and often patients have a misdiagnosis of asthma when in fact they have COPD or have ACOS.7

What Distinguishes ACOS from COPD or Asthma?

All three lung conditions—COPD, asthma, and ACOS—are chronic diseases. The patients in all three groups will tend to complain of cough (sometimes producing sputum), dyspnea, and wheezing. However, asthma and ACOS may also be associated with feelings of chest tightness while COPD tends to not include this symptom. Asthma patients often have never smoked (or may have only had exposure to second-hand smoke), while COPD and ACOS patients often have a history of smoking or exposure to biomass fuels (such as burning wood or other substances to cook or heat).5 ACOS may also appear in patients who have had long-standing asthma and have had airway remodeling occur.

COPD usually appears in those ?40 years old. Like COPD, ACOS is usually associated with patients 40 years old and older, but they may have had symptoms at earlier ages. Asthma tends to appear in childhood but may crop up at any age. Sometimes asthma manifests in childhood, fades in teenage years or early twenties, and then reappears in early adulthood. Symptoms for asthma tend to vary day-to-day and may occur more often at night, and they are often are linked to a trigger such as changes in seasons, dust, exposure to allergens, or post-exercise. Asthma symptoms often improve significantly with proper treatment. Between asthma flare-ups, patients may be asymptomatic. Symptoms in COPD and overlap syndrome tend to be persistent (but with some variability) and improve less dramatically with proper treatment as compared to the relief seen in asthma post-treatment.5

Bronchial hyperresponsiveness (BHR) or “twitchy airways” may be present in ACOS (but may also be present in asthma and COPD). Rather than using a direct agent (like methacholine) to uncover BHR, it is recommended to use indirect acting agents such as histamine, mannitol, adenosine, or hypertonic saline to help expose this problem.6 All three diseases are characterized by exacerbations, but patients with overlap syndrome have three times the frequency and more severe exacerbations compared to asthma and COPD. Exacerbations are linked to triggers such as viral infections and bring about acceleration in the loss of lung function.6

Patients with asthma alone may have normal lung function between periods of increased symptoms and show reversibility in airflow limitation in pre/post bronchodilator testing. Both patients with COPD alone and those with overlap syndrome tend to have persistent airflow limitation (seen as an FEV1/FVC measurement of <0.7), but ACOS may also show reversibility in the FEV1 response to a short-acting beta2  agonist (SABA) such as albuterol. Reversibility is defined as an increase of 200 mL and ?12% increase in the FEV1 post-bronchodilator.

The GOLD guideline sets the threshold for diagnosing COPD at having a post-bronchodilator FEV1/FVC measurement of <0.7 and uses the post-bronchodilator FEV1% predicted to assess severity of the disease.5 The recommended threshold for COPD of an FEV1/FVC measurement of <0.7 has been criticized for increasing the risk of overdiagnosing older patients who have a natural decline in lung function. An alternative threshold uses the lower limit of normal predicted to avoid this problem.8

Patients with COPD may show a positive response to a bronchodilator with improvement in the post-SABA but will not reach the threshold of reversibility (the increase in FEV1 falls short of a 12% and 200 mL change). The ACOS guidelines add another layer in the diagnostic confirmation by using spirometry values; if the FEV1 post-bronchodilator response reaches an increase of 400 mL and an increase of >12%, there is a high probability of asthma and is compatible with ACOS, but this much change in the FEV1 post-bronchodilator would be unusual in patients with COPD alone.5 Long-standing asthma may bring about airway remodeling, which results in incomplete reversibility of airflow. As this problem develops, the asthma patient begins to look more like someone with COPD. A longitudinal study published in 2003 found that 16% of asthma patients converted to incomplete reversibility after 21 to 33 years of follow-up.9

Diagnosis and Management of ACOS

GOLD’s Asthma-COPD Overlap Syndrome guidelines provide a five-step process for diagnosis and management of ACOS. The published guidelines provide an easy-to-follow summary of this approach with details covered in additional tables.5 The following overview reflects the nature of this process:

Step 1: Does the patient have chronic airways disease? The answer to this question is found in the clinical history, physical examination, and radiographic findings, and by using screening questionnaires.

Step 2: Examine the characteristics of the patient’s presentation for distinct or overlapping features. In the ACOS document, asthma and COPD have their own set of features that describe the disease (for example, asthma: onset before age 20 years; COPD: onset after age 40 years).

Each feature has a check box. There are 11 features for each disease, and three or more features under one heading in the absence of an alternative diagnosis presents a high likelihood for the correct diagnosis. When a similar number of features are checked under both COPD and asthma, the diagnosis of ACOS reaches a high likelihood.

Step 3: Record spirometry. ACOS guidelines state, “Spirometry is essential for the assessment of patients with suspected chronic disease of the airways. It must be performed at either the initial or a subsequent visit, if possible before and after a trial of treatment.” Spirometry is evaluated based on pre- and post-bronchodilator FEV1/FVC and FEV1% predicted as described above.

This approach includes use of an inhaled corticosteroid (ICS) in a low to moderate dose and opens the possibility of adding a long-acting beta2 agonist (LABA) if needed (with the caveat that the LABA should not be given as a monotherapy but always combined with an ICS). Treatment of ACOS should also include the appropriate steps including smoking cessation, pulmonary rehabilitation, vaccinations, and treatment of comorbid conditions.

Step 5: Referral for specialized investigations. Referral to an expert should be made for patients who have persistent symptoms or frequent exacerbations after appropriate treatment has started; for patients who have not been clearly diagnosed (and in cases where other issues need to be excluded such as bronchiectasis, pulmonary fibrosis, or pulmonary hypertension); and for a few other instances (see the ACOS guidelines for more details).

In cases that are difficult to distinguish the proper diagnosis, special tests such as DLCO, ABG, high resolution CT scan, skin testing for atopy, and checking biomarkers such as fractional exhaled nitric oxide (FeNO), blood eosinophilia, and sputum analysis may be useful to pinpoint the right disease.5

Issues to Resolve and Conclusion

Further research may begin to answer more questions in the ACOS area.8 These research topics include issues such as:

Asthma and COPD are major diseases worldwide, and each carries an enormous burden in many areas. With the recent recognition of asthma-COPD overlap syndrome, a new understanding of the interplay of these two diseases is moving into the healthcare arena and new research topics have been brought up related to this syndrome. Understanding the diagnosis, management, and patient/family educational issues of ACOS is an important task for respiratory therapists to pursue to help their patients deal with this pulmonary problem. RT

Bill Pruitt, MBA, RRT, CPFT, AE-C, FAARC, is a senior instructor and director of clinical education in the department of Cardiorespiratory Sciences, College of Allied Health Sciences, at the University of South Alabama in Mobile. In addition, he works as a PRN therapist at Springhill Medical Center and volunteers at the Victory Health Partners Pulmonary Clinic in Mobile.

Treating COPD with Help from Amoebas