As vigilant readers of this column will know, though I have a long history in health care journalism, I’m new to the world of respiratory therapy. But in the three short months I’ve been on the job, I’ve been deeply impressed by the community of practitioners in the respiratory care field.

RTs are not narrowly defined by the therapy they provide. They are as much educators as caregivers, and focused not just on the patients they are assigned, but as well on the RT community as a whole. They can also be quite funny.

I learned this last month when I encountered Jim Allen, who has built an amazing career out of his love for and experience in respiratory therapy, education, and cartooning. Jim is perhaps best known for his single-panel cartoon series Full Moon. Based on life in the fictional Meshugga General Hospital, the cartoons portray the funnier aspects of health care in general, and respiratory care in particular.

Jim’s 20 years in the field were formative ones. His hands-on clinical experience fed into his lifelong love of cartooning, leading him to originate the “Off the Cuff” cartoon strip for the AARC Times early in his career.

Though he also was a syndicated political cartoonist for several years, he eventually tired of “skewering people” in his work. The world of health care, however, continues to inspire him. (As he puts it, he has “gone from the poison pen to health care humor.”) He publishes new cartoons twice a week on his website, FullMoonComics.com. 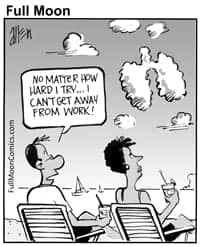 The other key aspect of his experience in respiratory therapy was realizing the importance of education. Through his involvement in in-service training, he became intrigued by the learning process, and entered graduate school while working as an RT, eventually earning a doctorate degree in education.

Though he does not currently work as an RT, Jim remains deeply involved in the respiratory care community. In addition to his cartooning, he teaches school districts about asthma and runs the ION Pulmonary Health education website, ionph.com. He has also combined his interests in education and cartooning to develop a learning model based on cartooning that he hopes to introduce to a respiratory program.

What’s perhaps most interesting to me about Jim’s example is that he is not so unusual a representative of the RT community. To get a sense of the diversity, enthusiasm, and commitment of this community, you only need visit our Facebook page or, especially, our LinkedIn page, where you will see how dynamic and supportive its members are. I hope you’ll visit both and join these exciting community platforms.

John Bethune is the editorial director for Allied Media and the chief editor of RT Magazine. Comments can be sent to [email protected].