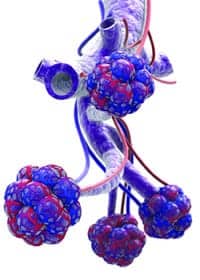 Determining whether a patient has pulmonary (lung and/or airway) disease can be an involved process. There are a number of steps that can be taken to decide whether symptoms such as coughing, wheezing, and shortness of breath are the result of disease. Pulmonary function testing (PFT) is designed to pinpoint the exact nature of a breathing problem.

Pulmonary function testing is also used prior to surgery, particularly if the patient

• is more than 60 years old;
• is known to have pulmonary disease;
• is obese;
• has a history of smoking, coughing, or wheezing;
• will be under anesthesia for an extended period of time; or
• is undergoing an abdominal or chest operation.

Spirometry
Spirometers have been in use since the middle of the 19th century and are found today in physicians’ offices, as well as in specialized pulmonary function testing laboratories. Spirometry measures how much air the lungs are able to hold (vital capacity), how much air goes in and out of the lungs, and how quickly that air moves. This is done by having the patient take the largest possible breath and exhale it as forcefully as he or she can.

When spirometry results indicate the presence of obstructive disease such as asthma, the next step in diagnosis is often to determine whether the patient would benefit from drug treatment to reverse the obstruction. This is called pre-bronchodilator/post-bronchodilator testing. Spirometry is performed to obtain starting values before the patient is given medication to open the airways. After the drug has had time to work, the test is repeated. If there is improvement, this means that the obstruction is reversible, so medication will probably be prescribed.

Even if there is no immediate improvement, it is possible that the obstruction will respond to slower-acting drugs that reduce inflammation. To determine whether this type of medication will be helpful, the patient is asked to take the drug at home for a specified period of time and then return for more spirometry. If there is improvement, the anti-inflammatory medication is likely to be prescribed.

Bronchoprovocation testing may be used if asthma is suspected, but the patient’s obstruction does not show up during regular spirometry. After spirometry to obtain starting values, the patient is asked to breathe increasing concentrations of chemicals (such as histamine or methacholine) that can cause the airways to narrow. If the patient shows a drop of 20% in the forced expiratory volume in 1 second after a low dose of the test chemical, then the airways are considered hyperresponsive; medication may be prescribed.

Even if spirometry shows no significant improvement after the patient takes a bronchodilator or anti-inflammatory drug, treatable asthma may be present. Exercise-challenge testing is used to assess patients who experience their asthma symptoms in response to exercise. After spirometry, the patient uses a treadmill or exercise bicycle for up to 30 minutes. Spirometry is repeated intermittently during this time, unless or until the forced expiratory volume in 1 second decreases 20% or more from the initial reading. If the results show that exercise-induced asthma is present, medication can be prescribed to treat it.

Lung Volume
If spirometry shows that obstructive or restrictive disease is likely, then the patient’s lung volume will be measured. Measuring lung volume also helps evaluate the patient’s response to treatment, assess the extent of pulmonary disability, and evaluate lung function before surgery.

Lung volume is tested mainly to determine the functional residual capacity, which is the amount of gas remaining in the lungs after the patient exhales. Restrictive lung disease can be confirmed by testing lung volume; this may be done if spirometry shows a low vital capacity. There are three ways that lung volumes are measured: helium dilution, nitrogen washout, and body plethysmography.

Helium dilution tests lung volume by having the patient inhale a known volume of helium and measuring the helium concentration of the gas that the patient exhales until the helium has been fully diluted by mixing with the gas in the lungs. A mathematical formula is then applied to determine lung volume.

Nitrogen washout testing works because the amount of nitrogen (unlike oxygen or carbon dioxide) in air does not change when it enters or leaves the body, since the lungs do not exchange nitrogen with the bloodstream. Since air contains roughly 78% nitrogen, measuring all of the nitrogen in a patient’s lungs and adding about 22% to that figure will yield the functional residual capacity of the lungs.

In order to measure all of the nitrogen, however, it must be forced out of the lungs by another gas, since the lungs never empty completely. In this test, the patient breathes pure oxygen for about 7 minutes while the nitrogen is being exhaled and captured. Once the concentration of nitrogen in the exhaled gas has become negligible, the patient goes back to breathing room air and the total captured nitrogen is used to calculate the lung volume.

Body plethysmography, wherein the patient sits in a sealed booth and breathes from a mouthpiece while testers measure pressure and flow changes is more accurate than other methods in assessing lung volume. This is due to its ability to detect and account for trapped air (which is not exchanged during breathing, but forms part of lung volume). It also overcomes the problem of error due to air leakage, which can happen at the mouthpiece, nose clip, or eardrum during other types of lung-volume testing. While this level of accuracy is not needed for all types of pulmonary function evaluation, it can be helpful in assessing patients with emphysema. It is typically the most expensive method of lung-volume testing, so it does not replace the other methods.

Diffusing Capacity
Diffusing capacity, also called lung diffusion or transfer factor, is the ability of the lungs to move oxygen from inhaled air into the bloodstream. This ability is reduced by changes in the lung, the blood, and blood circulation, so the test can help in the diagnosis of several diseases. Diffusing capacity is tested using a very small amount of carbon monoxide, since the lungs move this gas into circulation in the same way that they move oxygen.

This test is used to help evaluate a number of conditions, including parenchymal lung disease, emphysema, cystic fibrosis, cardiovascular disease, the effects of chemotherapy, and pulmonary hemorrhage. It can also serve as an early indication of certain pulmonary infections and can help the tester assess the patient’s level of disability.

Diffusing capacity is usually tested using a single breath, but patients who find it difficult to hold their breath for 9 to 11 seconds may need to repeat this maneuver a few minutes later, after the test gas is no longer present in the lungs. Some centers also prefer to have all patients repeat the maneuver three times for comparison purposes. Patients may also be asked to stop using supplemental oxygen for several minutes before the test, since the results would otherwise be difficult to interpret. Patients whose lungs can hold only small amounts of air may be unable to undergo this test, since the sample would not be large enough to give an accurate result, but some testing centers have specially modified testing equipment to compensate for this problem. To determine whether the blood can carry the normal amount of oxygen, the patient may be asked to give a blood sample before or during the test. This step will be omitted if the physician already knows the oxygen-bearing ability of the patient’s blood.

To ensure that the test results will be accurate, the patient will be asked not to smoke tobacco for up to 24 hours or drink alcohol for up to 8 hours before testing. During the test, the patient wears a nose clip and breathes through a mouthpiece, keeping the lips tightly sealed around it to avoid air leaks that could change the test results. After breathing normally for a few breaths, the patient will be asked to exhale until the lungs are empty and then take the largest possible breath (which will be the test mixture of nitrogen, oxygen, helium, and carbon monoxide). After holding this breath for a few seconds, the patient will be told to blow out this breath, which will be captured as the sample for analysis.

Reliable Results
Errors can occur in spirometry because some spirometers need frequent recalibration, but a more common reason is insufficient patient cooperation. Spirometry is different from many medical tests in one fundamental way: the patient is required to take an active part in the test. For the test to provide the best results, the patient has to give an honest effort, inhaling and exhaling to maximum capacity. The tester must also be able to recognize whether a patient’s effort level is acceptable. It is important for the patient to follow the tester’s instructions carefully at all times.

Another difficulty in measuring pulmonary function is that the lung is such a variable organ. This variability crosses all demographic lines and can cause wide variations in normal results from patient to patient. The most striking differences are inherited. For example, many patients of African heritage may have longer legs and arms than those of European descent, and many patients of Asian extraction have narrower chest cavities. Normal spirograms, as a result, will be different for each group. There can also be slight variations from region to region, and test results will differ between men and women, the old and the young, the tall and the short, and the large and the small. An experienced testing center will compensate for these differences.

Fortunately, pulmonary function testing is neither painful nor difficult for the patient. It is only rarely associated with side effects, although an occasional patient may cough or become dizzy and need to lie down, or may require supplemental oxygen. Some patients, however, are fearful of using the mouthpiece on the spirometer and other breathing devices because they are concerned about becoming infected. Communicable diseases, however, are not likely to be transmitted through pulmonary function testing equipment. The mouthpieces that patients use either are disposable or are sterilized between tests. Filters can also be added to the equipment.

Pulmonary function testing can provide a wealth of information leading to correct diagnosis and helpful treatment. If it is to yield these benefits, however, the patient must prepare for testing as instructed, listen carefully to the tester’s directions, and make the best possible effort to cooperate. If any instructions are unclear, it is important to ask the tester to explain them so that the results of testing will be accurate and useful.

Chris Wolski is a contributing writer for RT; Kris Kyes is technical editor of RT.