“A” Is for Asthma Camp 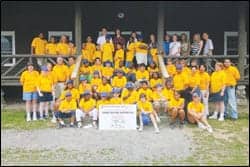 As they trade in beach balls for schoolbooks, dozens of children in Mid-Atlantic states will treasure memories of a summer camping experience unrestricted by asthma, thanks to the American Lung Association (ALA) of the Mid-Atlantic.

More than 2 decades ago, the regional organization recognized a need to provide a specialized camp for young people with asthma who could not attend traditional, mainstream summer camps.

“More than 20 million Americans suffer from [asthma],” says Laura Quinn, director of communications for the ALA of the Mid-Atlantic. “The asthma camps offer an overnight program or day camp that includes an opportunity for children to learn more about their condition [and] how to better manage their asthma while enjoying an educational and exciting experience like other children.”

The ALA of the Mid-Atlantic sponsors four asthma camps: Spacer Camp in Delaware, Asthma Camp Experience (ACE) in Pennsylvania, Camp Catch Your Breath in West Virginia, and Camp Super Kids in New Jersey.

Spacer Camp, a day camp for 7- to 11-year-olds, runs four 4-day sessions in the summer at four different Delaware sites. With the camp’s popularity, Spacer Camp has had to limit enrollment at each site and put children who have previously attended on a waiting list.

The other three camps are residential camps, hosted on campgrounds where children stay overnight. ACE, for 8- to 12-year-olds, operates three 4-day sessions in Pennsylvania. Jackson’s Mill 4-H Camp Ground in West Virginia hosts the annual Camp Catch Your Breath, for approximately 70 children ages 8 to 13. Camp Super Kids entertains around sixty 8- to 12-year-olds for a week in Sussex County, New Jersey. At each camp, a full-service infirmary, which also holds the medical records of each camper, can sustain any child in any respiratory situation.

“[It is] very similar to a Mobile Army Surgical Hospital (MASH) unit or emergency room,” Quinn explains. “The New Jersey camp at Fairview Lake even has the capability to air-lift any child to the nearest hospital if necessary—although, thankfully, an emergency of this kind has never occurred.”

Aboard the Sponsor Ship

The asthma camps rely on donations from individuals, foundations, corporate sponsors, parents, and the community to keep them—and their campers—running.

“More than 80% of children in the Pennsylvania camp alone need financial assistance in order to attend. Most of these children cannot attend traditional summer camps because the camps don’t support their medical and emotional needs,” says Carol Chu, director of asthma camps for the ALA of the Mid-Atlantic.

The camps are cosponsored by a variety of local hospitals and medical centers; some serve as campgrounds for the asthma campers, others lend medical personnel to supervise and educate the children, and still others provide financial assistance for the camps.

“They are amazing,” Quinn says of the hospital volunteers, “They have busy practices and full medical schedules, but they are tireless in their dedication to the camps.”

Spacer Camp’s Sussex County Camp, for example, is cosponsored by Beebe Medical Center; the respiratory care department sponsors bake sales to get donations for supplies, gifts, and scholarships for campers.

Many of the children attending the camps are inner city youths, a situation that hospital volunteers are sensitive to. At one camp, volunteers noticed that some of the campers didn’t have enough socks to last them the entire week—and they returned bearing socks, an expense paid from their own pockets.

“They make those personal connections,” Chu says. “They are just so committed and dedicated.”

Trina Clark, MS, RCP, director of respiratory and sleep services at Beebe Medical Center, says that the medical staffers “have a blast” volunteering.

“Everyone enjoys teaching in this fun-filled atmosphere. It’s a big change from caring for a sick child in the acute care setting,” Clark says. “We are enjoying the opportunity to help these children learn about their disease now, so they can keep it under control as adolescents and adults.”

The camp’s infirmaries house an on-site, 24-hour licensed medical staff of physicians, nurses, RTs, educators, and professional counselors, as well as a certified ALA camp director—almost all are volunteers.

In the last decade alone, the ALA of the Mid-Atlantic’s asthma camps have provided approximately 2,500 children with summer experiences they otherwise could not have enjoyed because of their condition. The attentive staff, armed with regularly scheduled medication rounds, addresses campers’ physical and medical needs before turning to quenching the youngsters’ seemingly unending thirst for summer fun.

“The campers are encouraged to overcome obstacles and challenge themselves through hikes and interactive activities,” Quinn says.

Just like many children do in traditional camps, asthma campers swim, fish, and boat in fresh, cool waters; take on nature trails; frolic with newfound best friends under sunny summer skies; and test their mettle against glue and scissors in arts and crafts. Many of the camps have different themes for each session, turning children into detectives or dolphin watchers for a day. Unlike their mainstream cousins, which often cater to repeat campers, ALA-sponsored camps introduce many asthma patients to their first real taste of the great outdoors. According to a nationwide clinical profile of children attending asthma camps, the majority of the 15,000 children who attend the 125 asthma camps in the United States every year have never camped before.1

With 30 years of camp directorships at mainstream camps (think Girl Scouts and youth groups) under her belt, Chu understands the divide between the mainstream camps and asthma camps better than most. When a boy with asthma arrived at Chu’s more traditional camp last year, liability issues forced the camp to turn him away.

“I had to call his parents and send that child home. We just didn’t have the medical support for him,” she says, “It was really disheartening. Every child needs to go to camp.”

Destiny called this year when Chu became the director of camps for the ALA of the Mid-Atlantic: While she was working at one of the asthma camps, the same boy, now an asthma camper, ran up to Chu in youthful excitement.

“I believe in fate. For some reason, I was brought here,” says Chu, who herself has asthma. “I get it: These kids just need to be kids.”

Learning to Live with Asthma

Fun and games aside, asthma education takes center stage at the camps. The medical staff teaches campers about their condition, identifying trigger points, explaining how their lungs function, and teaching asthma management in daily sessions. Asthma education is woven into the very fabric of the program, where the messages are reinforced throughout the day. In some of the asthma camps, parents and children attend orientation sessions to give the staff a chance to educate them together.

One study values the financial health care savings that asthma camps provide—in the form of education that results in fewer emergency department visits, school absences, and hospitalizations—at more than $2,000 per child enrolled.2

“Not only do children enjoy themselves at camp, they also gain self-confidence, a sense of responsibility, and the realization that they are just like other kids,” Quinn says.

“They learn they can be away from their primary care providers,” one mother told interviewers in a 2005 study commissioned by The Consortium of Children’s Asthma Camps.3 “As a mom, I gained independence [by learning] that someone else can take care of my child,” she continued.”

The ALA of the Mid-Atlantic is not alone in its mission to provide children with asthma with a healthy outdoor summer experience; asthma camps exist all around the nation, many of them sponsored by local and regional ALAs. The Consortium of Children’s Asthma Camps offers an asthma camp locator on its Web site, www.asthmacamps.org, as well as educational resources for parents and campers alike.

Lisa Ma was RT’s summer journalism intern. She is a sophomore at Duke University in Durham, NC.